Worst can be avoided 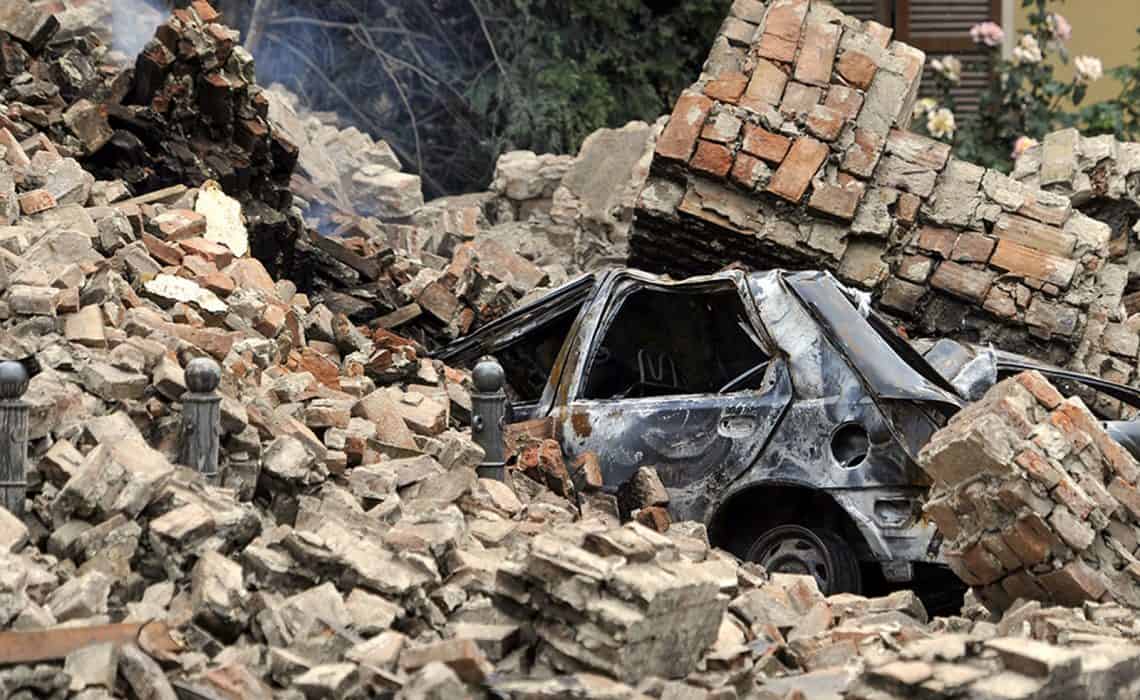 The earthquake that struck Italy in August and all the shocks that continue to damage our country, remind us that Italians living in risky areas are over 50 million.

But we can do something: this article published in the magazine YouTrade explains how we can act.

The earthquake that struck Italy last August and the earthquake swarm that continues to cause damage and victims, confirms the reality: there are 26 million Italians living in classified high-seismic areas.

Another 25 million are in areas classified as medium seismicity.

It is the 83.6% of the Italian population, a very high value, especially considering that 3 million people live in very high seismic areas, while the percentage of the population exposed to no seismic risk is only 5%.

In brief, we live in a risky territory, and this risk has increased over time, since the maps of seismicity have been updated with the events of recent years, in particular after the earthquake in Emilia Romagna in 2012.

After that earthquake, Italy discovered a nation much more at risk than what was previously thought.

As a consequence, a debate has begun on the need for prevention and on the necessary investments to reduce risks, ensuring the safety of buildings, not just residential ones, but even non-residential ones, given that the earthquake in Emilia Romagna showed that the constructive criteria of industrial-craft warehouses did not take into consideration the seismic risk, simply because those territories were not classified as places at potential risk.

44% of our territory is at medium-high risk

Of these buildings, 86% are residential and 14% non-residential.

They are striking numbers, that indicate how the phenomenon of seismicity is much more relevant than thought in the past.

But even where medium-high risk municipalities are involved in lower percentages, such as in Emilia Romagna or Tuscany, the events of recent years indicate that no region is at zero risk, with the exception of Valle d’Aosta, Liguria and Sardinia.

The risk is real and it is relevant.

If we limit this bulletin to the last 50 years, seven were the most serious earthquakes, with 5.000 victims and 500.000 homeless.

Over the past 50 years, over € 121 billion has been spent on emergency and reconstruction, while the calculation of prevention investments made over the past 10 years is very low, just € 750 million.

These values are the sum of the sums allocated for reconstruction interventions in Italy from 1968 onwards, i.e. from the Belice earthquake of 1968, up to that of Emilia Romagna in 2012.

In some cases, some sums, as that of the earthquake of Irpinia or Abruzzo, have led to parliamentary debates and judicial inquiries, often with convictions for mismanagement, or even real fraud and embezzlement against the State.

The Court of Auditors wrote it clearly: in the reconstruction of Irpinia the recorded costs leavened up to 27 times with 48.5% never completed funded projects, with organized crime that did the rest, literally putting their hands on procurement.

The Antimafia parliamentary Commission in ’93 wrote that “the activity that took place around the use of the allocated funds was conditioned by the Camorra organizations”.

Investigations, accusations, waste, illegal contracts and speculative business on reconstruction, which unfortunately occurred even after the Abruzzo earthquake.

Yet a virtuous example, historically now considered unfortunately the only real good reconstruction practice, was the reconstruction of Friuli after the earthquake of 1976, which this year is in its fortieth anniversary.

A very positive example, albeit in its gravity, unfortunately not followed by other reconstructions.

Beyond these questions, although not secondary, linked to the reconstructions and sums allocated, the theme and the problem is that in reality the seismicity of our territory and the seismic risk are factors confirmed by daily surveys that the Invg is constantly carrying out with its monitoring stations and indicating that over the last ten years 154 thousand earthquakes have been recorded with magnitude over 2 points on the Richter scale.

There are 42 earthquakes a day, two per hour, that we can perceive if we are in a supine position.

These are no earthquakes to worry about from the static and structural point of view, but they give the idea that our territory is constantly movin: it fixes the faults, adjusts the tectonics, without interruption.

With reference to the last ten years, earthquakes with shocks above 3 degrees and up to 5 degrees on the Richter scale, those that begin to do minor damage, were 2,603, or 260 per year, two every three days.

The map of earthquakes and victims in the last century in Italy is a map that shows that the whole territory is involved, with some areas, especially those of the central and southern Apennines, which present not only high degrees of danger, but also a presence of the population that, precisely in catastrophic events, brings the number of victims to very high levels.

170 thousand victims in one hundred years is equivalent to the disappearance of a medium size city like Reggio Emilia.

To prevent damages, would be necessary significant interventions aimed at securing buildings.

But the sums allocated for this purpose only cover small shares of what is needed.

Yet the risk is wide and even if in this field there are no ways to predict the catastrophic event, the statistics show that we are inevitably exposed to very high risks.

It is therefore appropriate to intervene, using the best preventive safety techniques to avoid once again to rely on costly and burdensome reconstructions.

Too frequently reconstructions are badly done and of such poor quality that, after a few years, new potential victims and damages must be taken into consideration, caused by the collapse of small terraces built in the post-earthquake, as happened recently in L’Aquila.

Learning from mistakes and prevention should be the primary objective in this area and we can only hope that this will become a real common goal. 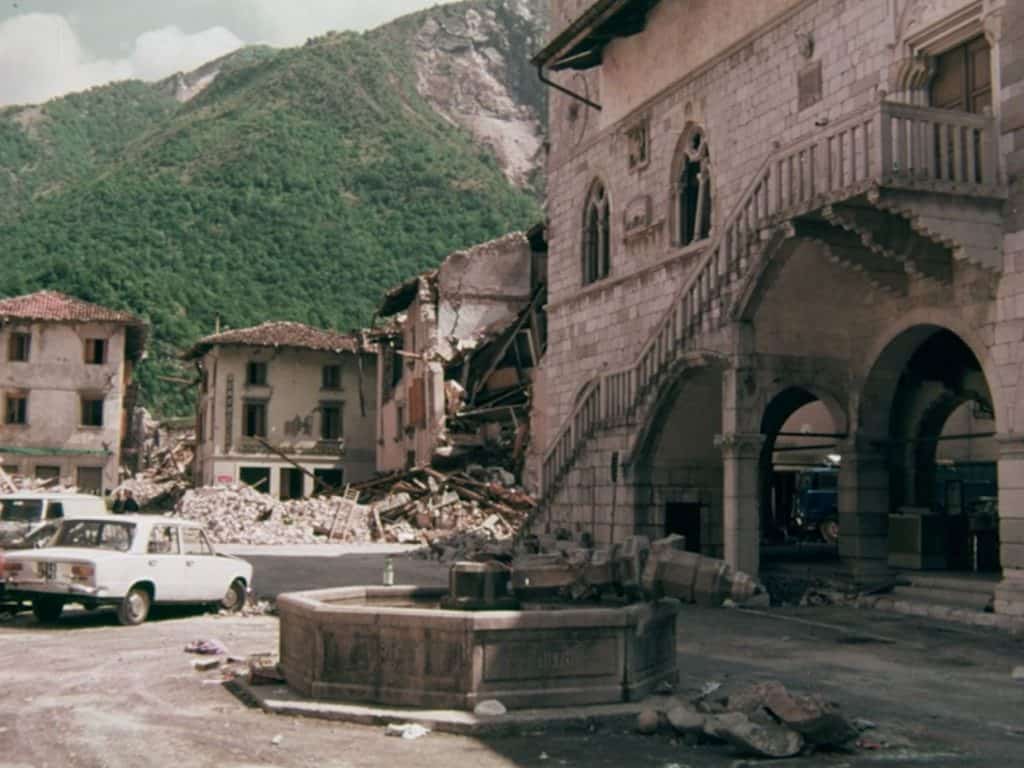 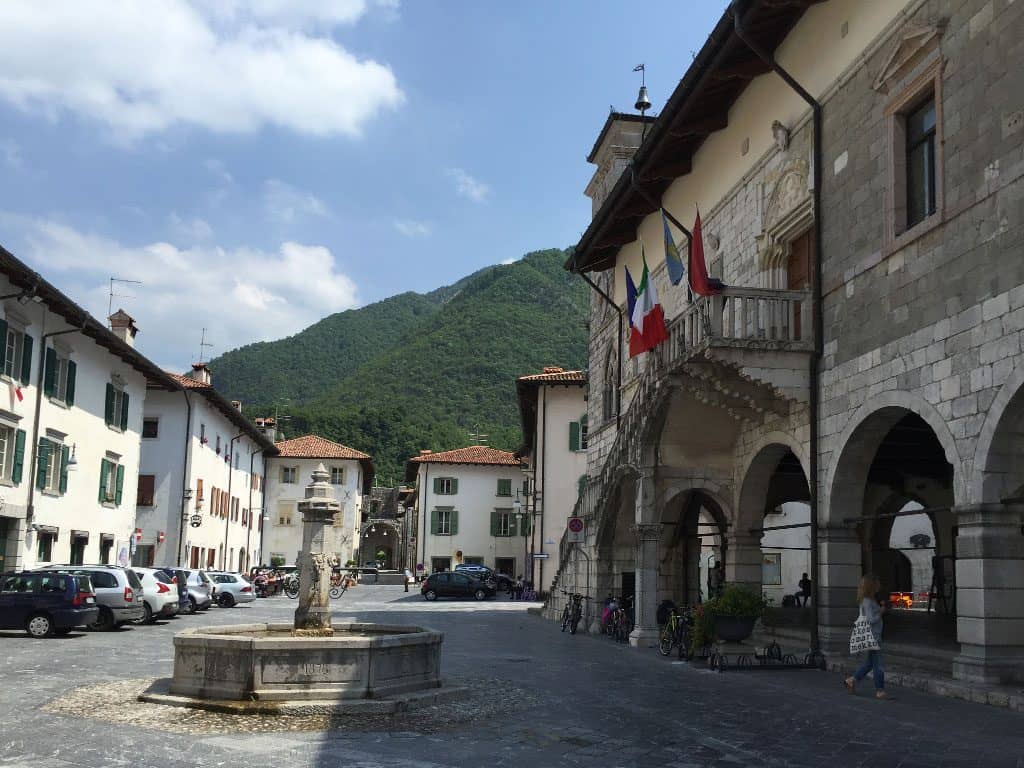 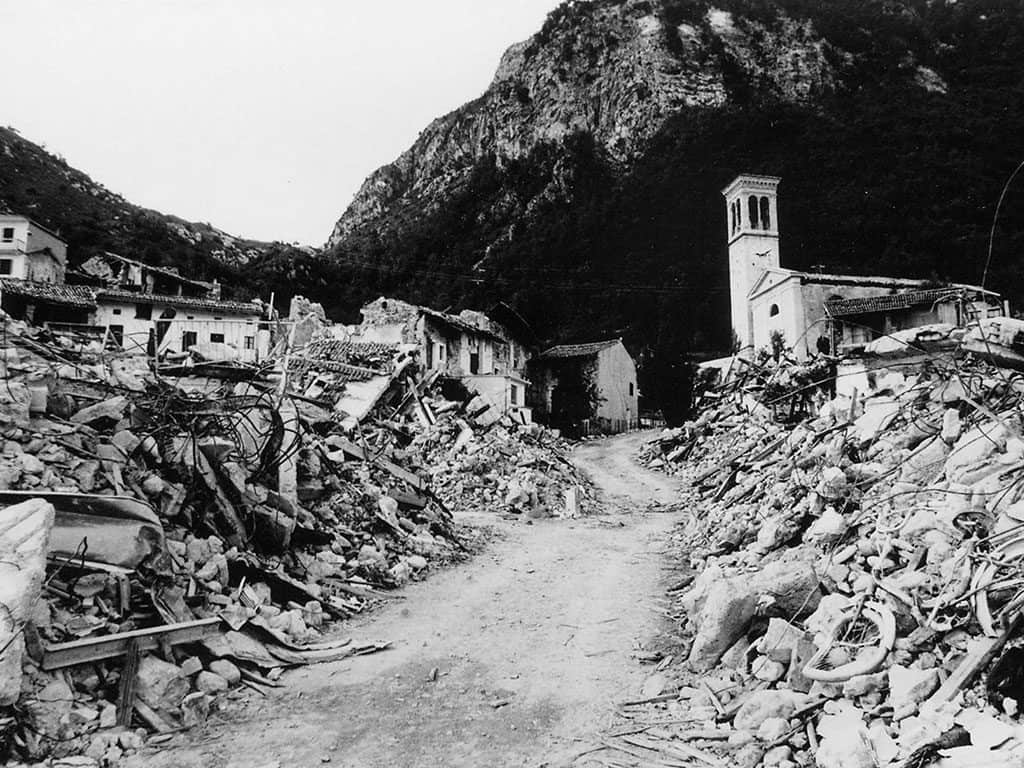 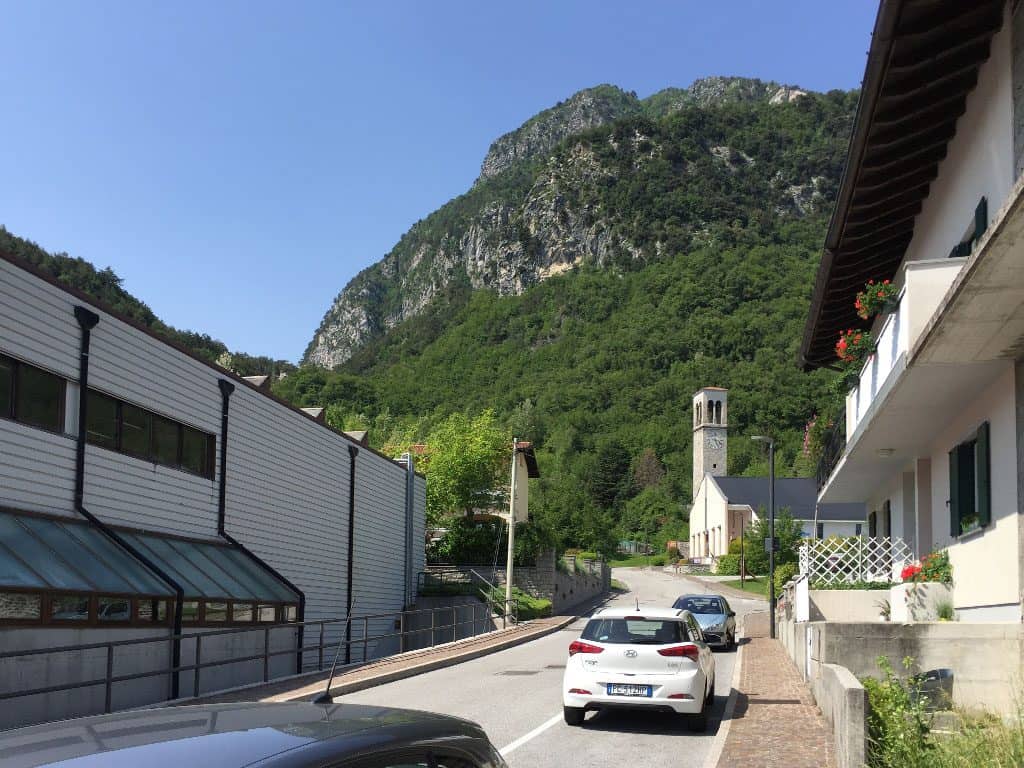 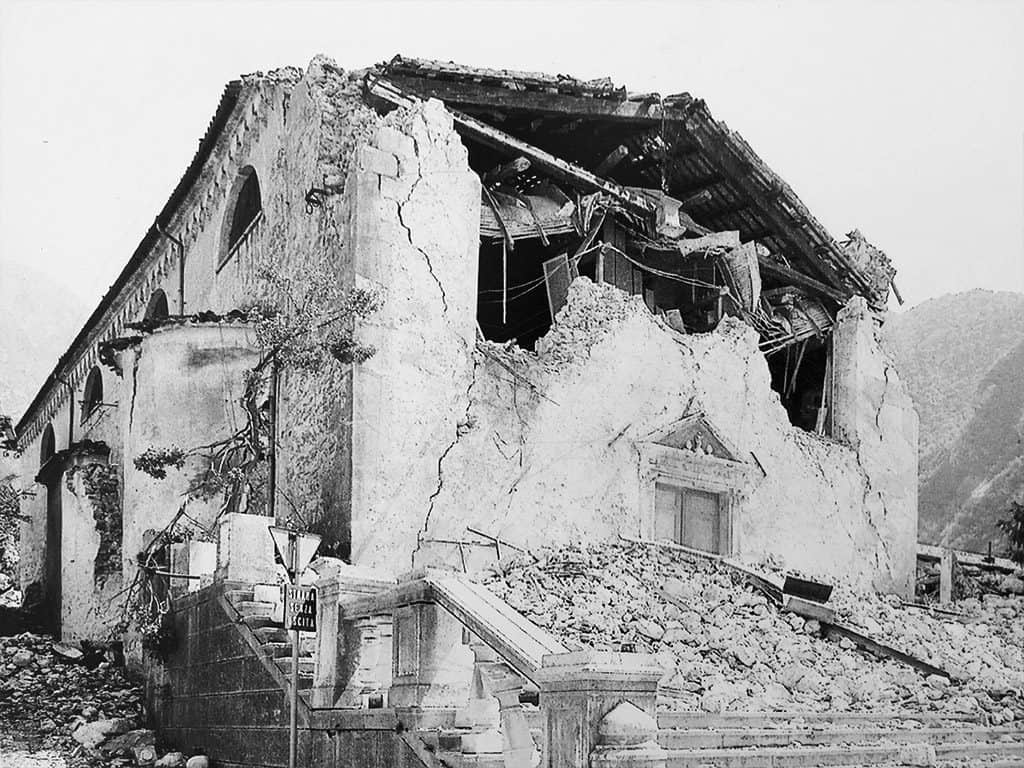 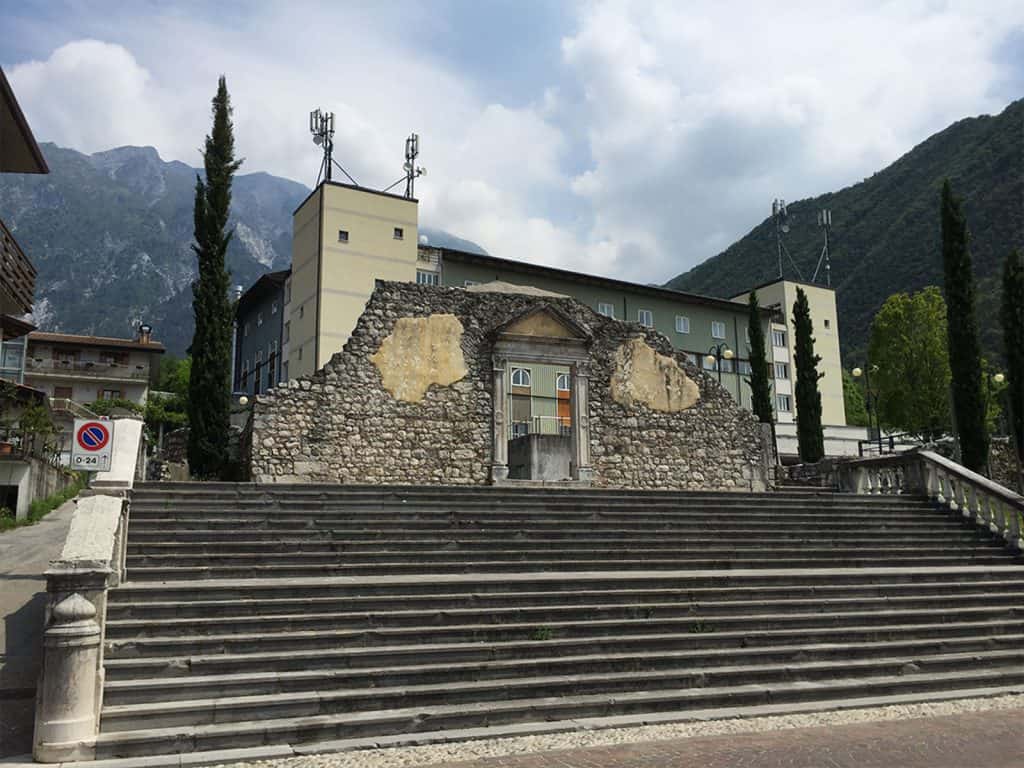 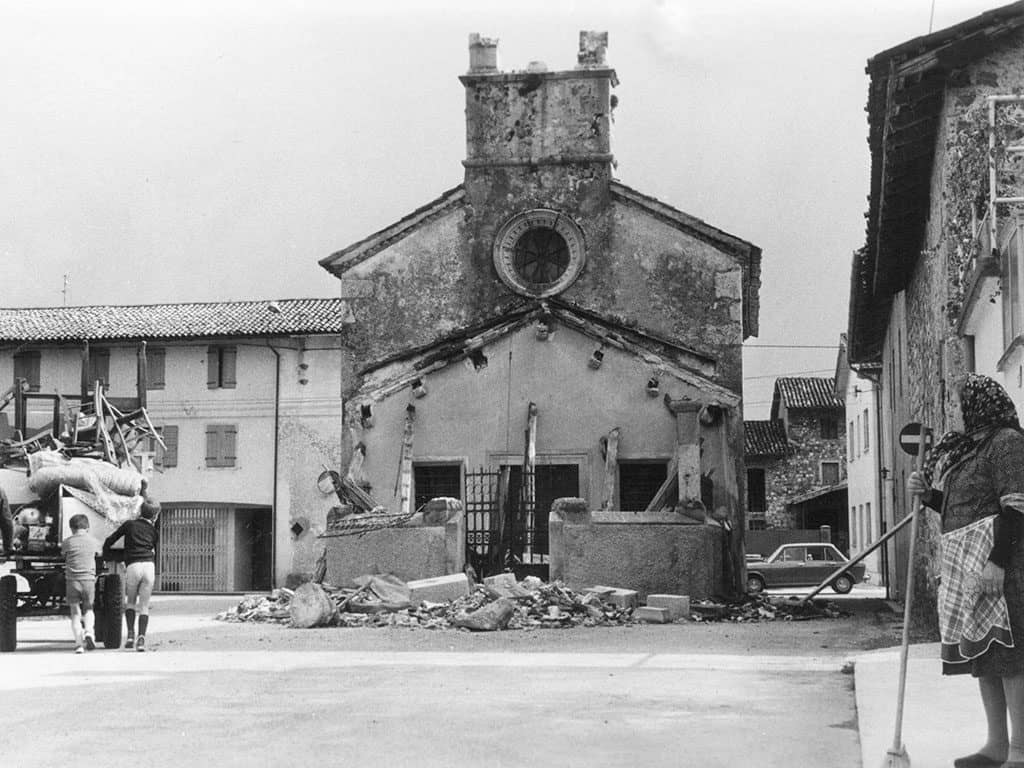 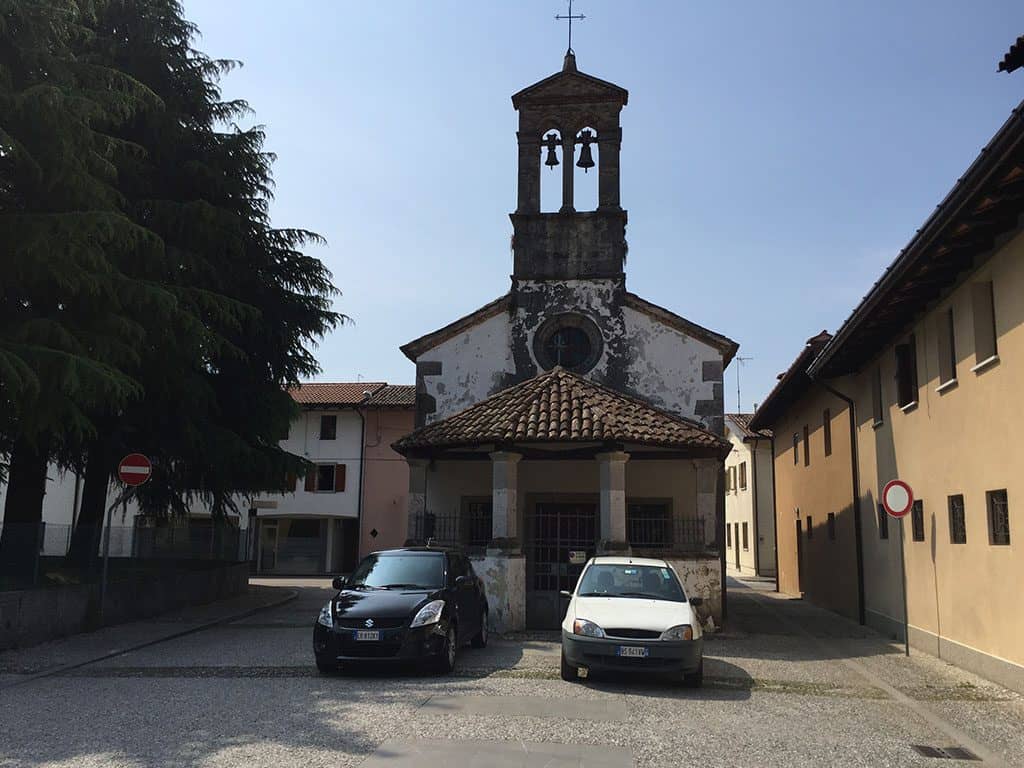 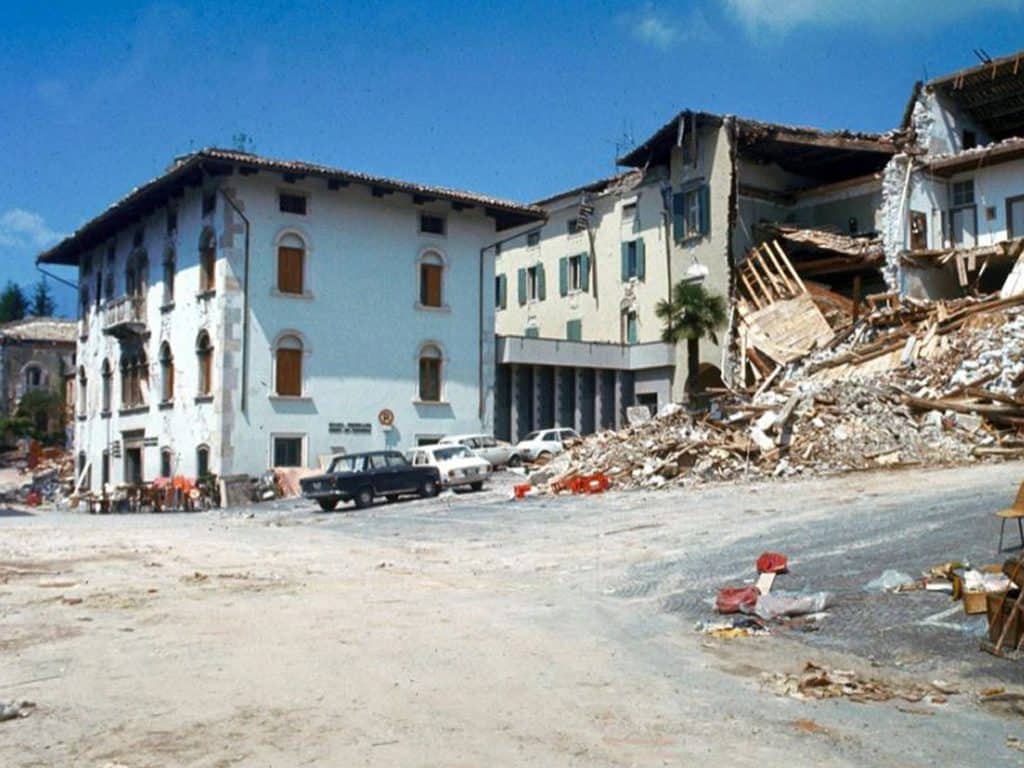 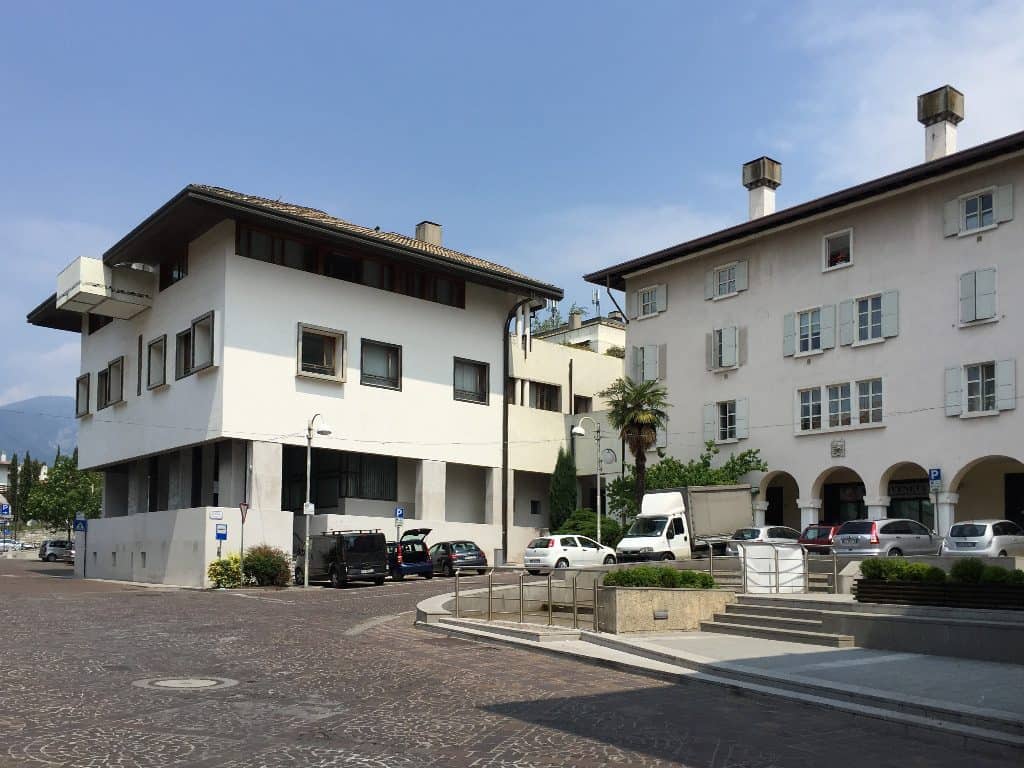 Piazza Garibaldi 2016 in Gemona Udine after the earthquake