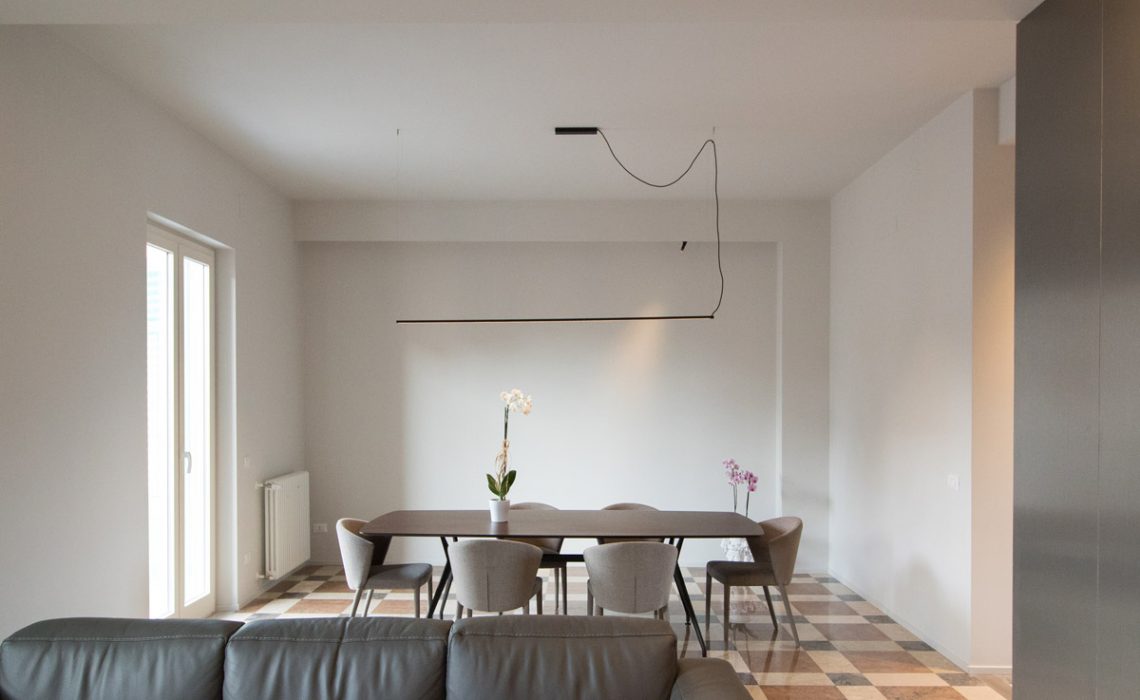 The time and the place

“The past does not exist, everything is simultaneous in our culture there is only the present, in the representation we make of the past, and in the intuition of the future.” (Gio Ponti)

The home of a couple, at the beginning of their life plan. Recently married and an arriving child, a surprise that occurred during the planning stages. Just in time to twist the plans a little.

The house, a family apartment, in the semi-central area of ​​the city of Palermo. A building from the 50s, strongly characterized by a longitudinal development plan, high ceilings and polychrome marble floors. Each room has its marble flooring: different types, formats and colors. 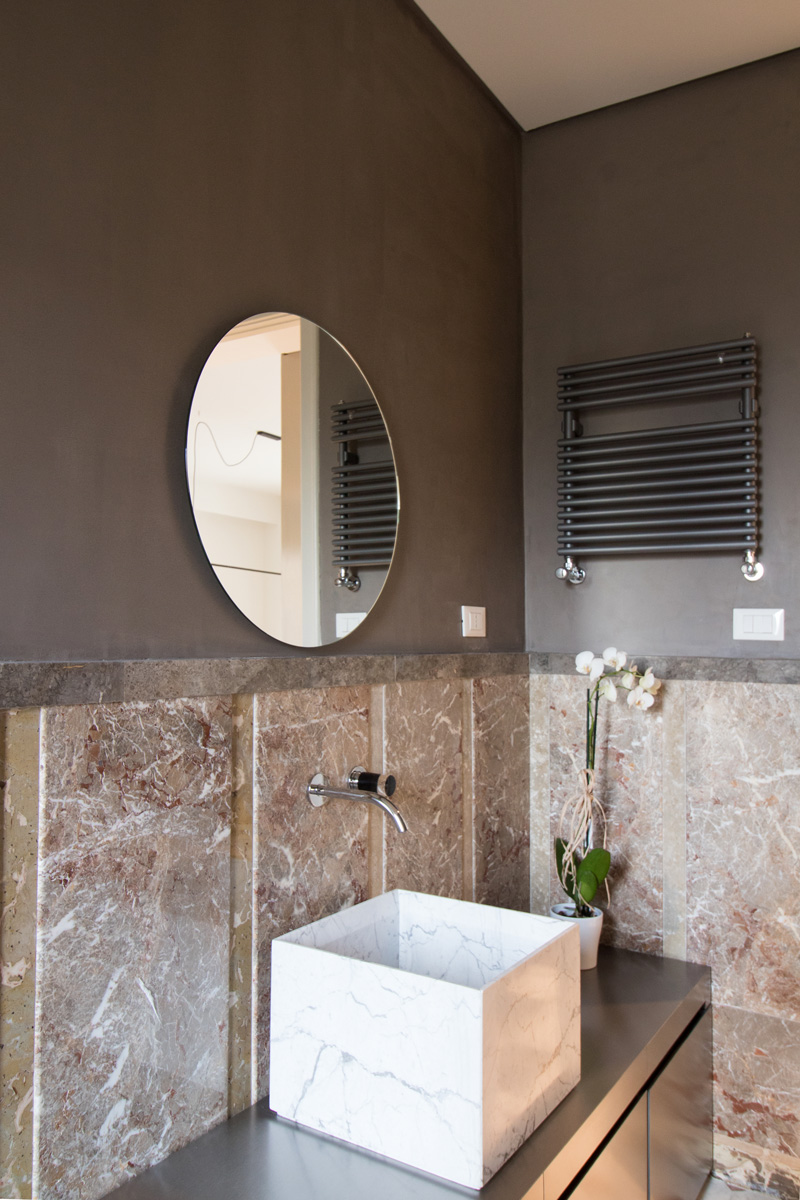 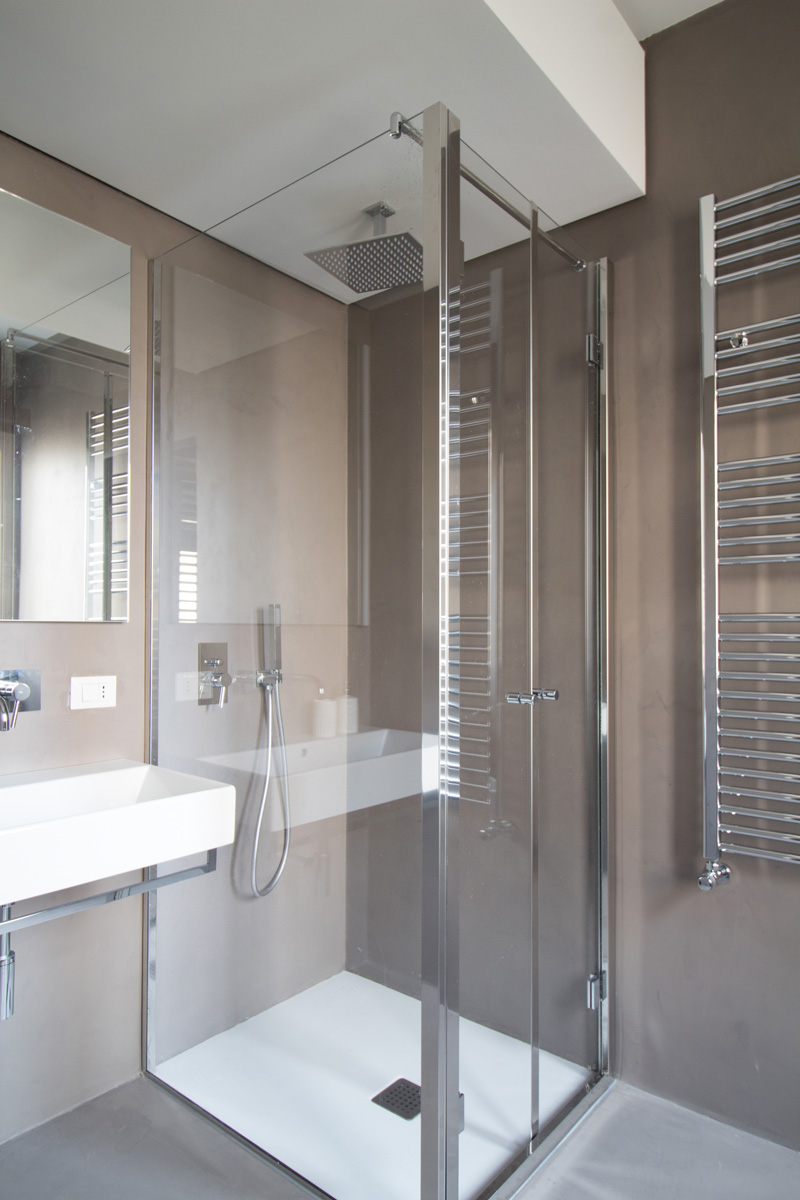 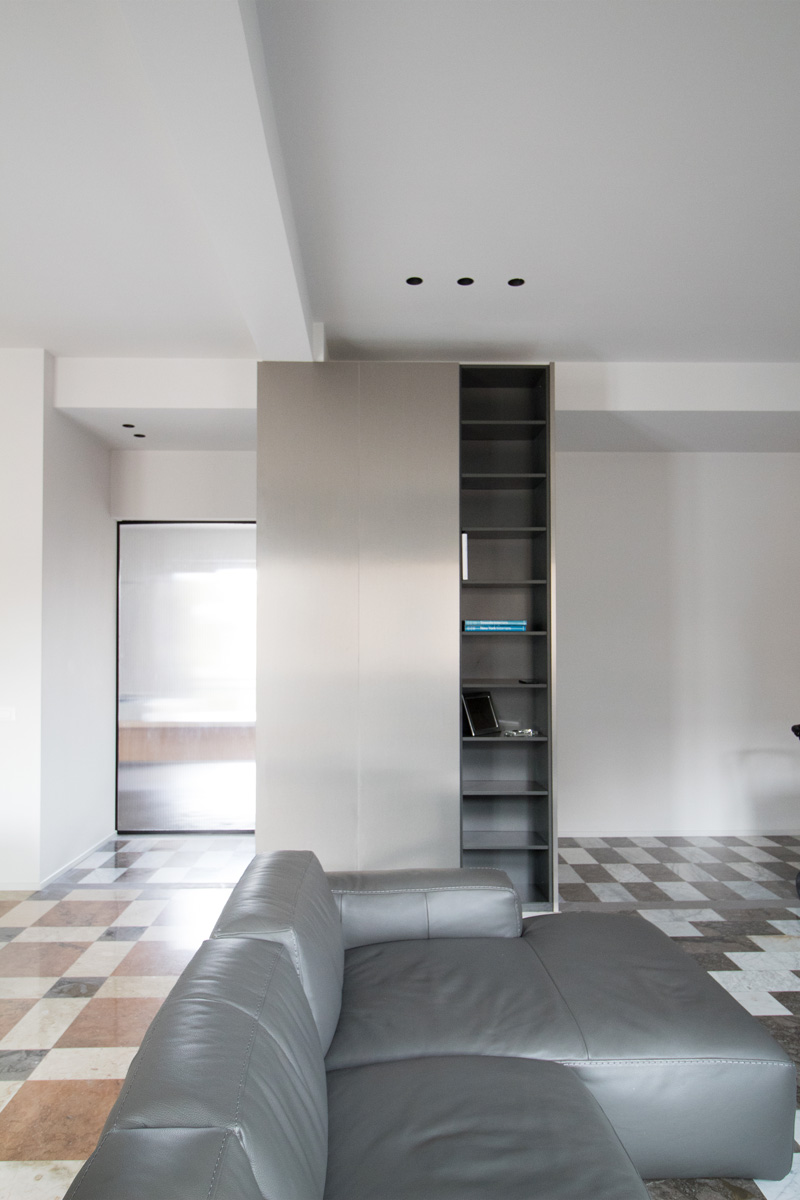 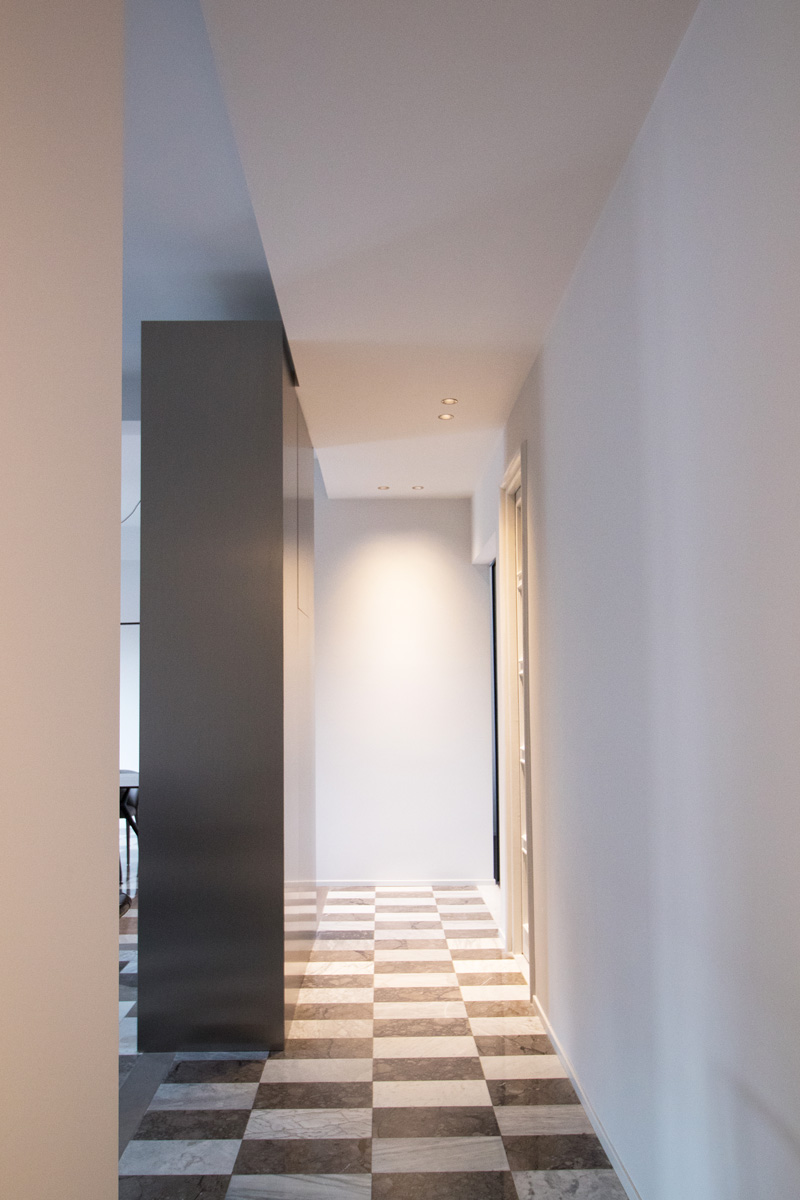 The expectations of the clients were those of a convivial house, less fragmented spaces in favor of a larger living area, directly connected to the kitchen to be traditionally kept in a separate environment. The design spirit shared and accepted by the client was to maintain the “memory” of the house and make it a story between past and future.

“The built architecture is charged with a whole series of spurious elements, not foreseen, which however give substance to the project” (U. Riva) 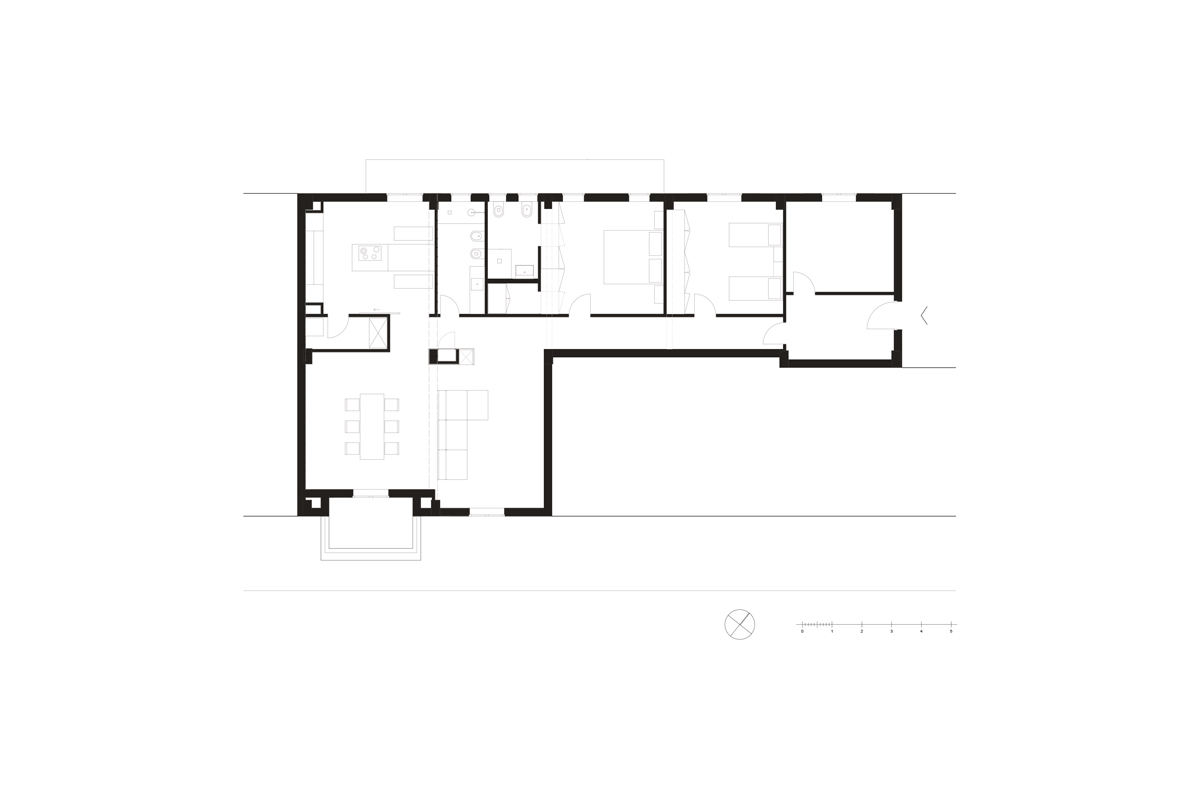 The corridor has thus become a path towards the “open” area of ​​the house. Where the visual focus of the route is given by the imposing aluminum volume (storage unit and bookcase), a hinge between the living area, kitchen and corridor. Along this path, the house tells its past with the flooring, the original doors and the original score of the disengaged rooms. 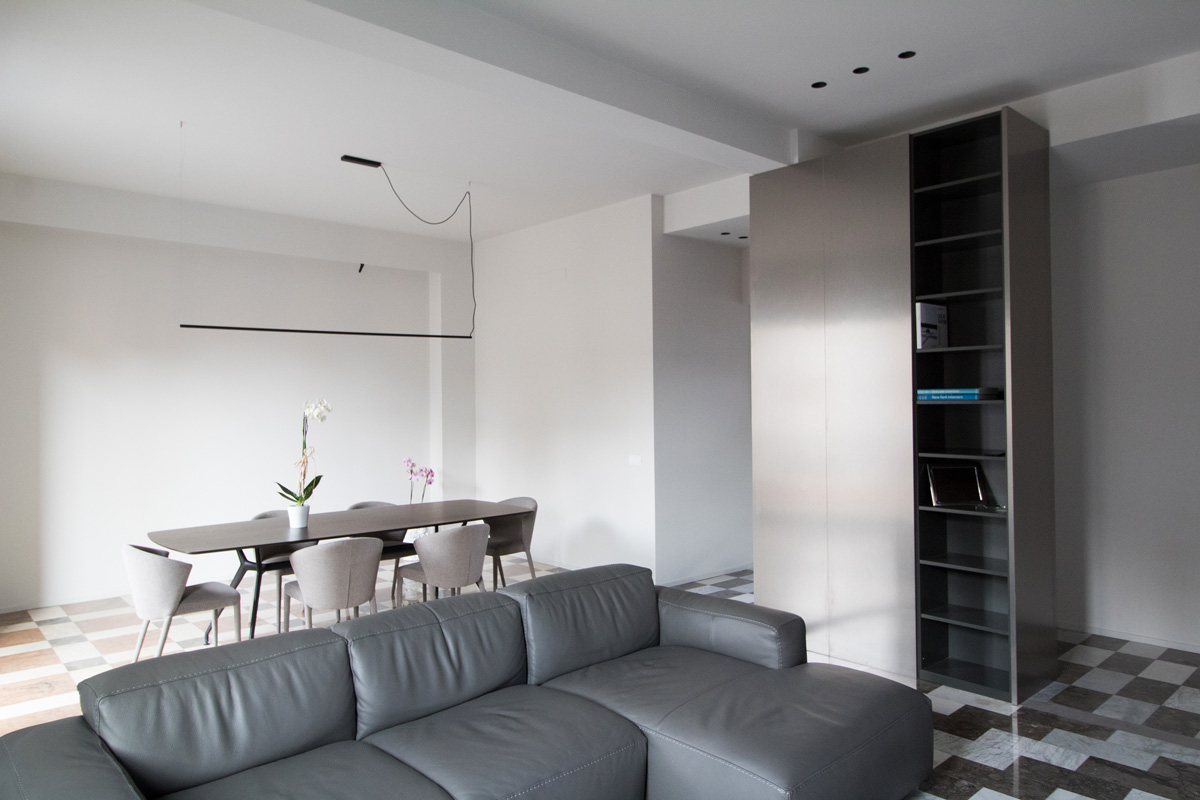 Flooring, internal doors and some covering marbles have become the lexicon of the new intervention. A decided project but with respect for the home.

In common agreement with the client, the Firm has decided to keep the original marble floors, which are highly characteristic (with the exception of the kitchen and master bedroom, for technical reasons), even in the most complex situations, where the new rooms, a combination of previous fragmentations, openly declare their origins with the traces on the floors and the free combination of the original floors. 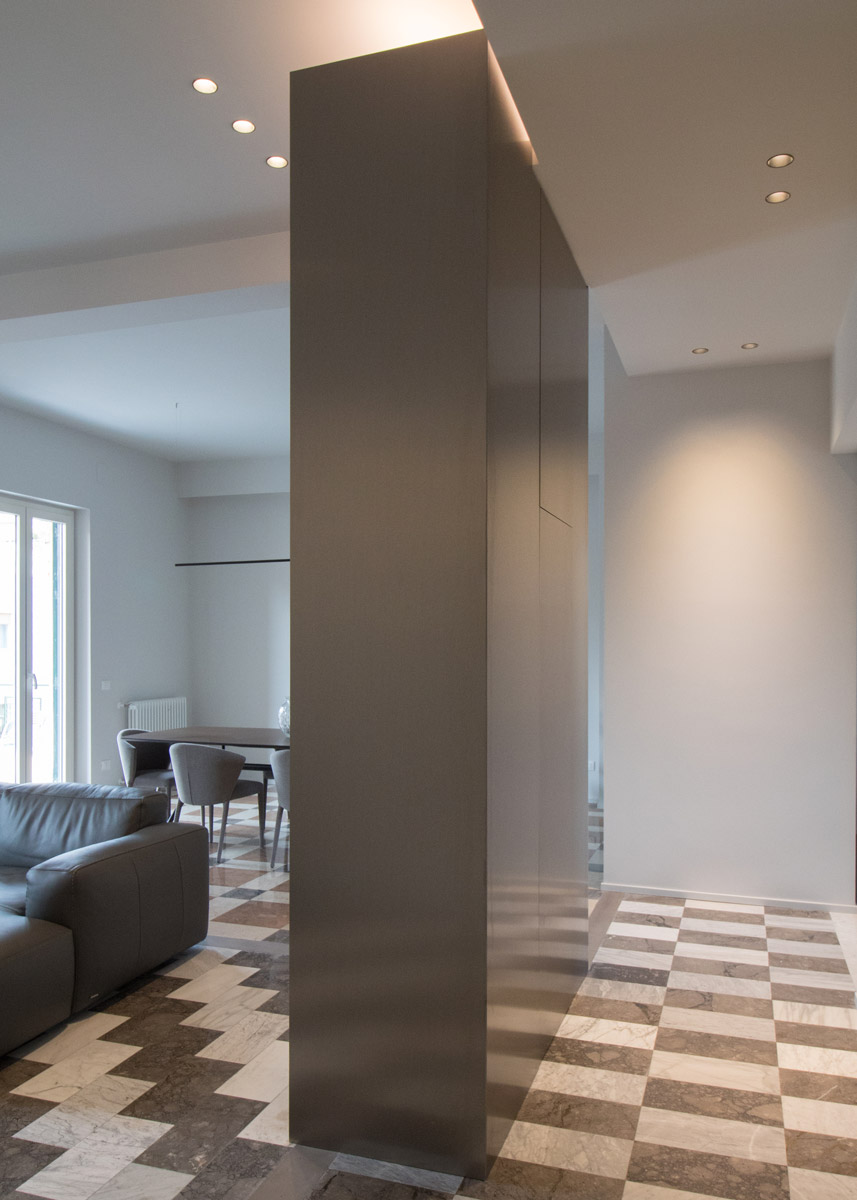 So the rest of the definitions were compared with the strong imprint given by the polychromes of the marbles. In the same way, the intervention on the main bathroom has safeguarded the existing coatings by intervening on furnishings, sanitary fixtures and systems, to renew it both formally and functionally. No derogation from mimicry or mitigating interventions between past and future, while working on a refined balance of composition. 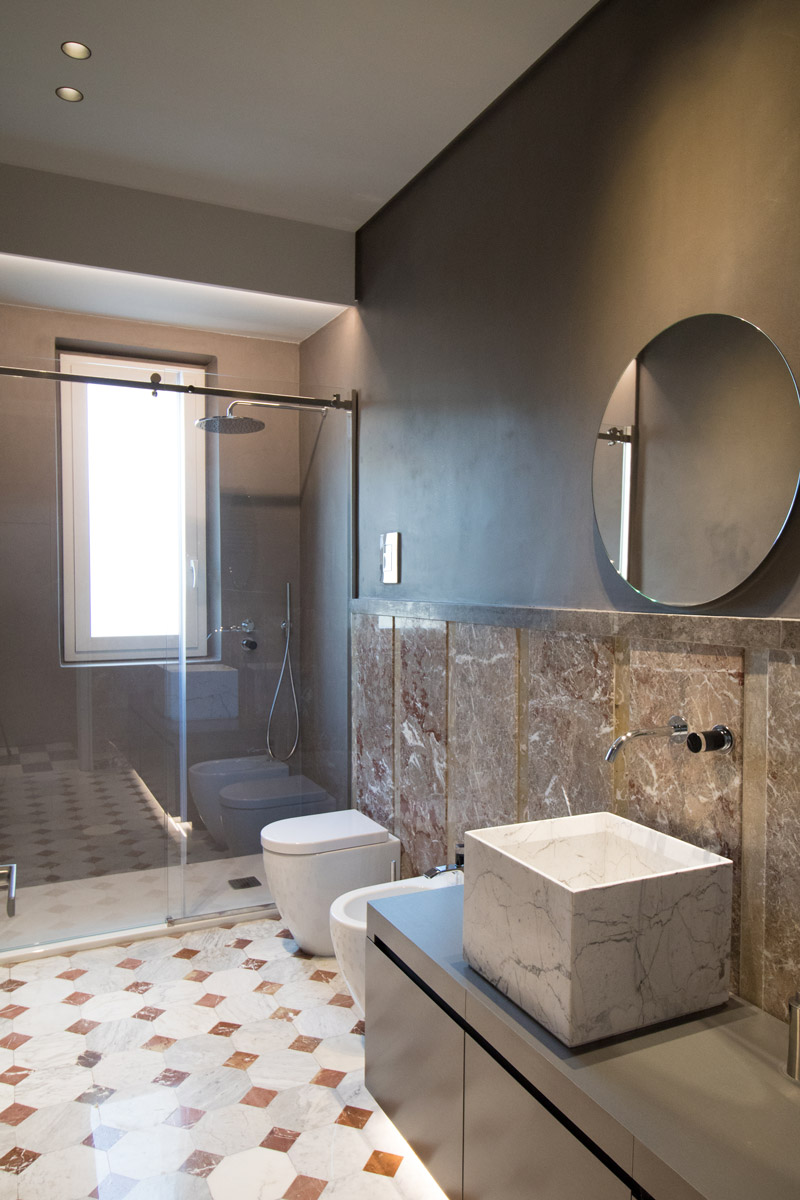 Artificial lighting, reduced to the essentials and without exhibitionism, is the punctuation of this story. 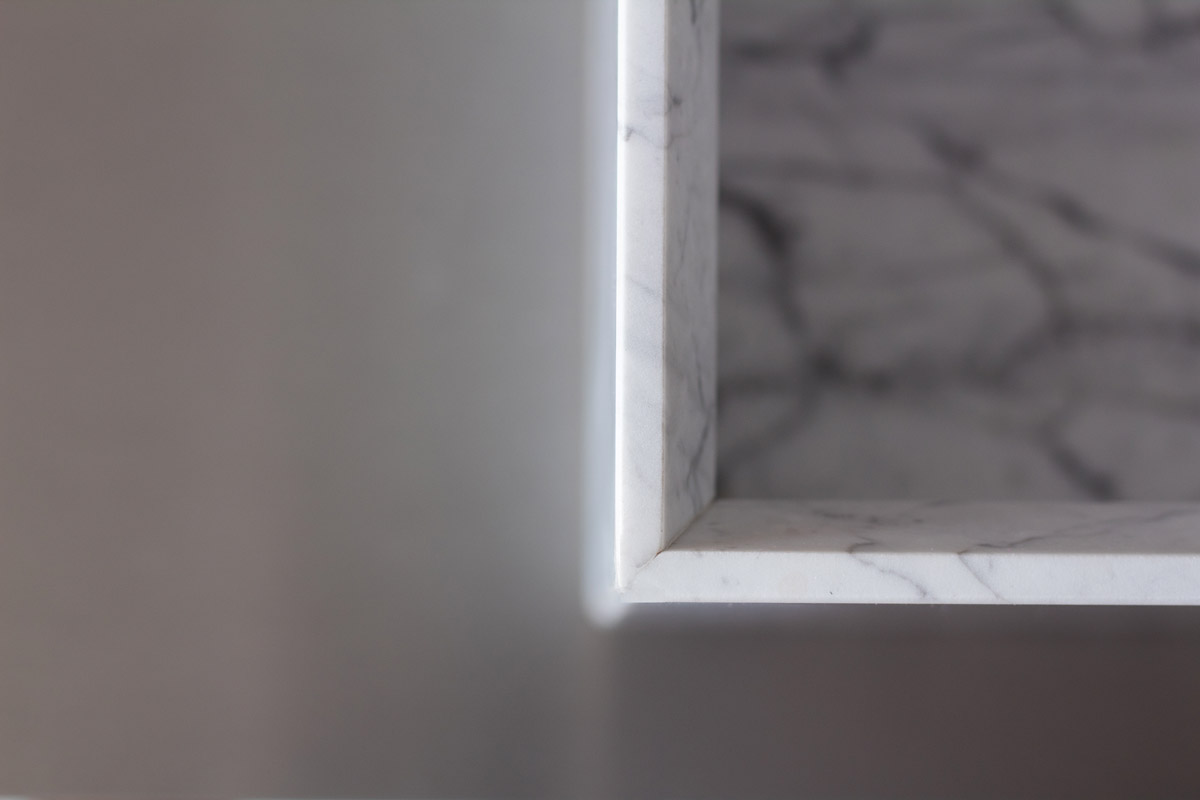 The interventions on the “container” are always kept to a minimum, as per the design attitude of the study, the story of the project develops on the material: marble, wood, aluminum, ecological mortar and glass. Contrasts and accents of the same painting. The retained and reflected light: a continuous reference to the search for balance we were talking about. All the fixed furnishings were custom designed by local craftsmen using an aluminum coating for the container element of the living room and for the bathroom cabinet. 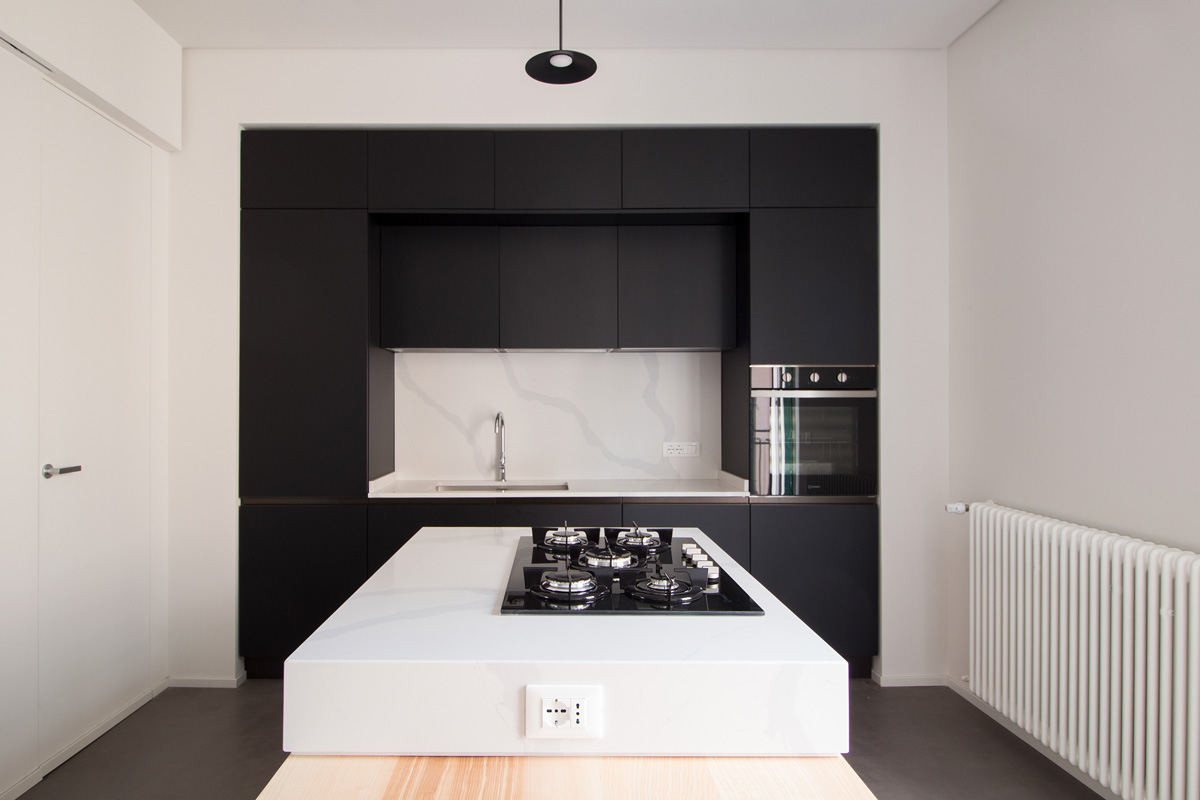 The kitchen island/table has also been made to measure, in solid ash, integrating systems and equipment of the technical part of the kitchen, which is industrial production. The technical solutions designed and consequently made to integrate the plant engineering part serving the hob are not easy. With the aim of a table reduced to its minimal essence, a monastic table for the main family rite: gathering around the kitchen table, the home hearth. 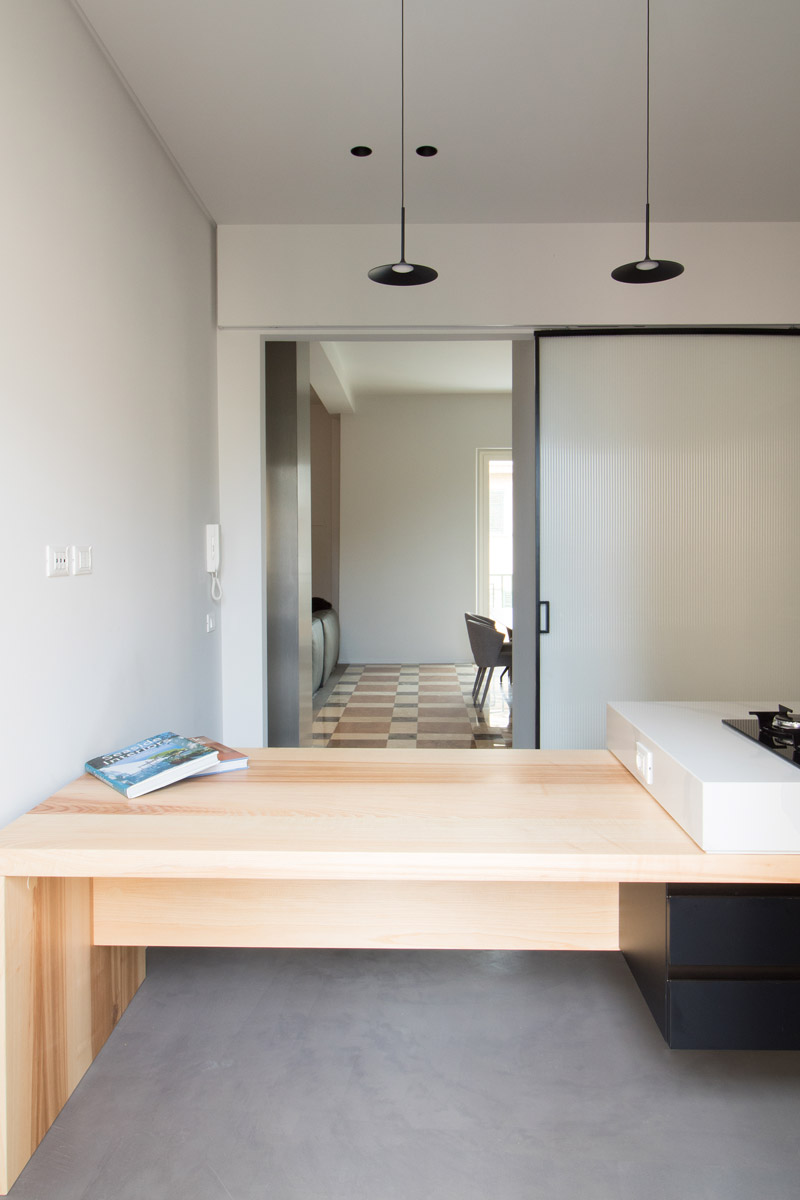 The new floors, necessary to allow the plant updating and the bathroom coverings, were made of ecological single-component mortar in aqueous emulsion and natural quartz fillers. Continuous surfaces with neutral tones in stark formal contrast with the pre-existences but in line with the natural essence of the materials.