CHYBIK + KRISTOF unveil design for a multipurpose skyscraper in Ostrava 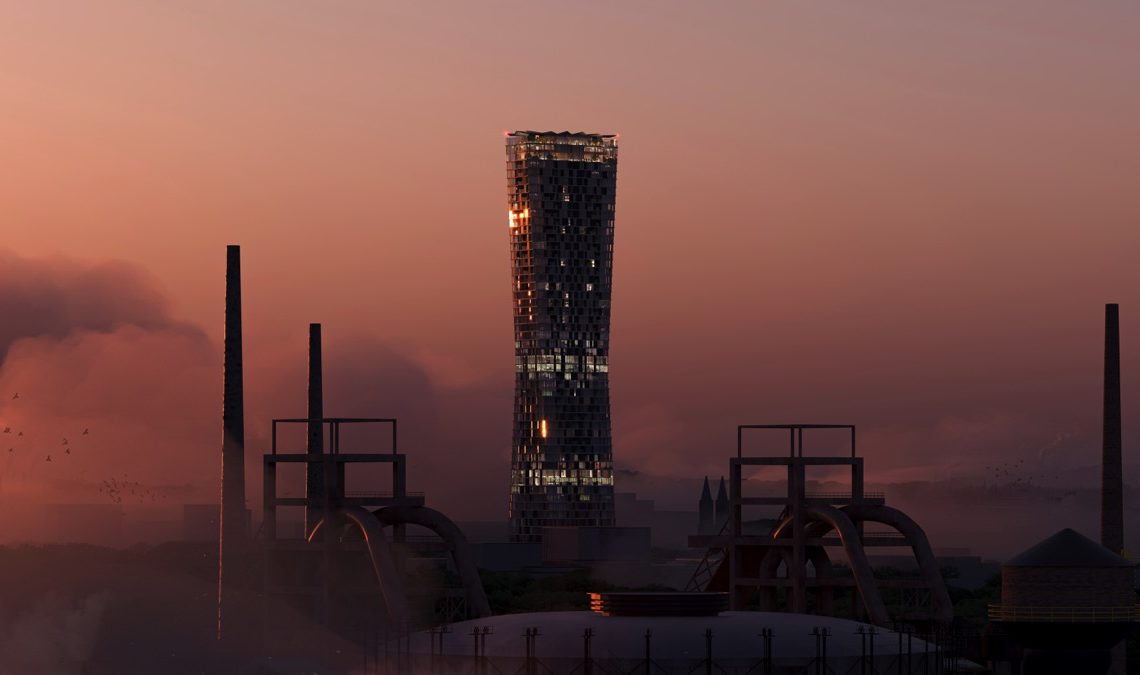 CHYBIK + KRISTOF (CHK) unveil plans for the construction of Ostrava Tower, a 235 metre-tall and 98,000m2 multipurpose skyscraper located in the heart of Ostrava’s city center. Initiated by the architects in 2019, their latest urban infill project addresses the need to reconsider the typology of the skyscraper into a new functional entity responsive to the contemporary social needs and in this case, the rehabilitation and reactivation of the post-industrial town of Ostrava. 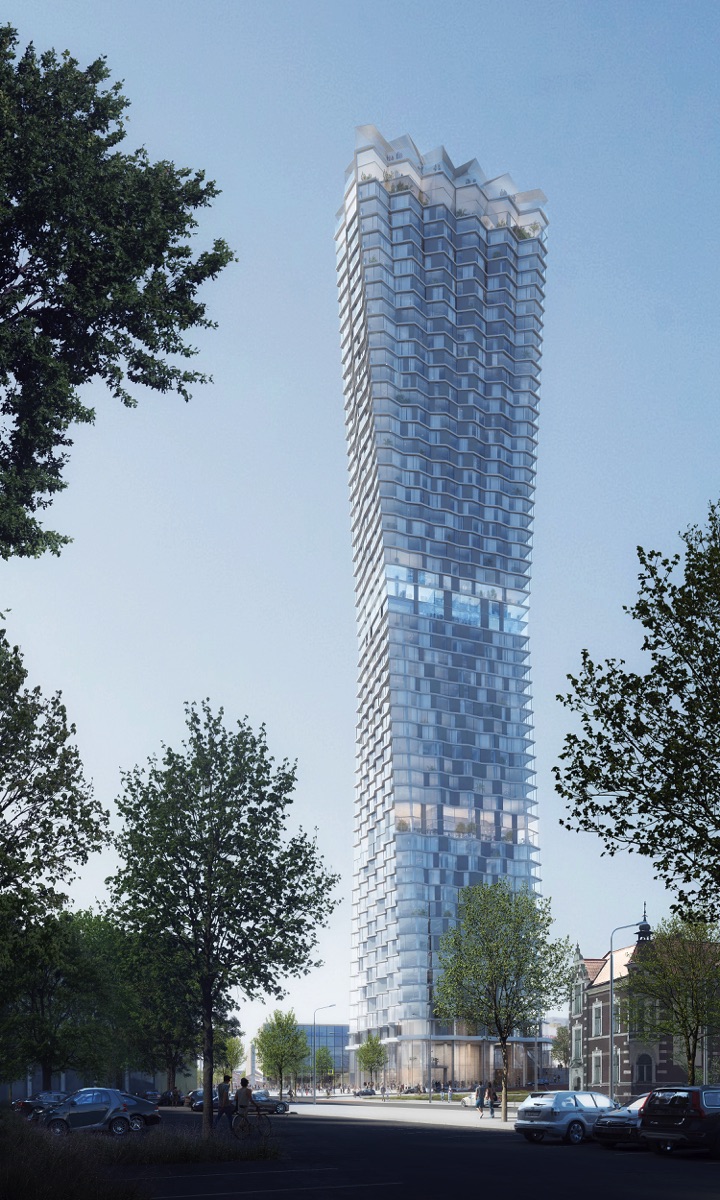 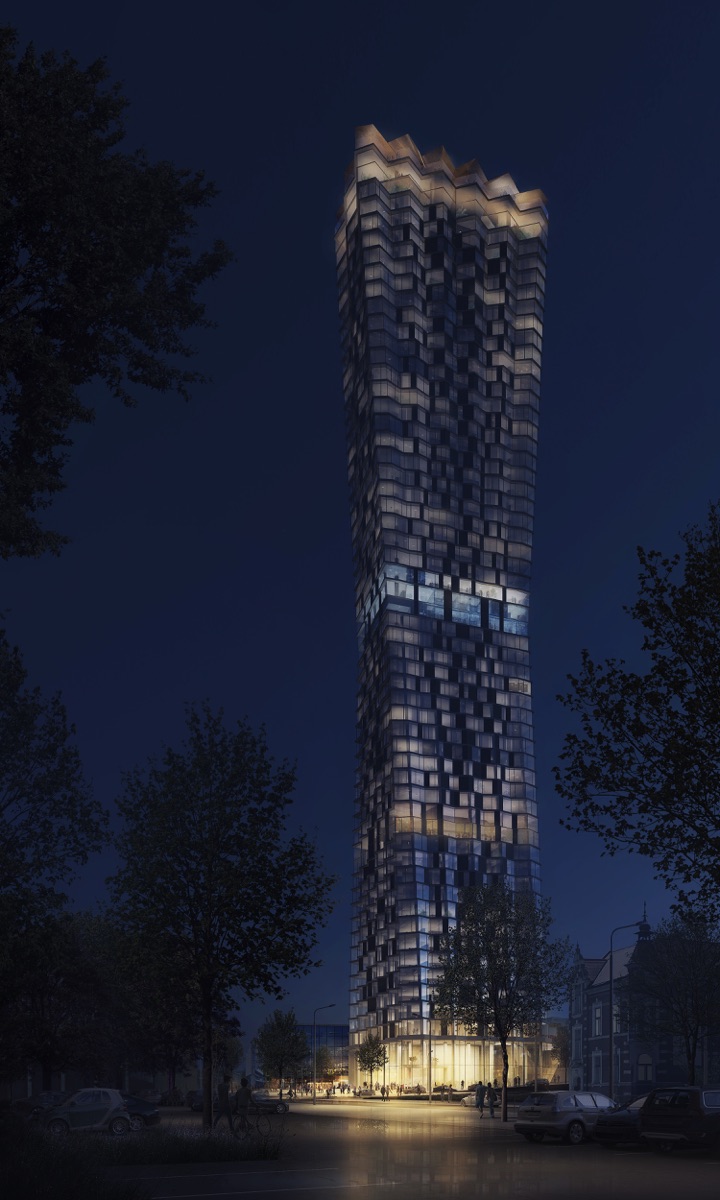 Over the course of the last three decades, Ostrava has transitioned from a coal-mining and metallurgical city to a service and information economy requiring the urban landscape to transition and adapt to this new rapidly growing cultural economy. With its rich history deeply affected by its traditional infrastructure, the capital of the Moravian-Silesian region, on the border of Poland has a metropolitan area population of almost one million inhabitants and is the third largest city in the Czech Republic. The rapid development of the former industrial sites to cultural and residential buildings, initiated by both public and private investors points to the future city of Ostrava. These include a new concert hall by the Steven Holl Architects, museums, university campuses, galleries, as well as residential and service projects to meet the population’s needs. 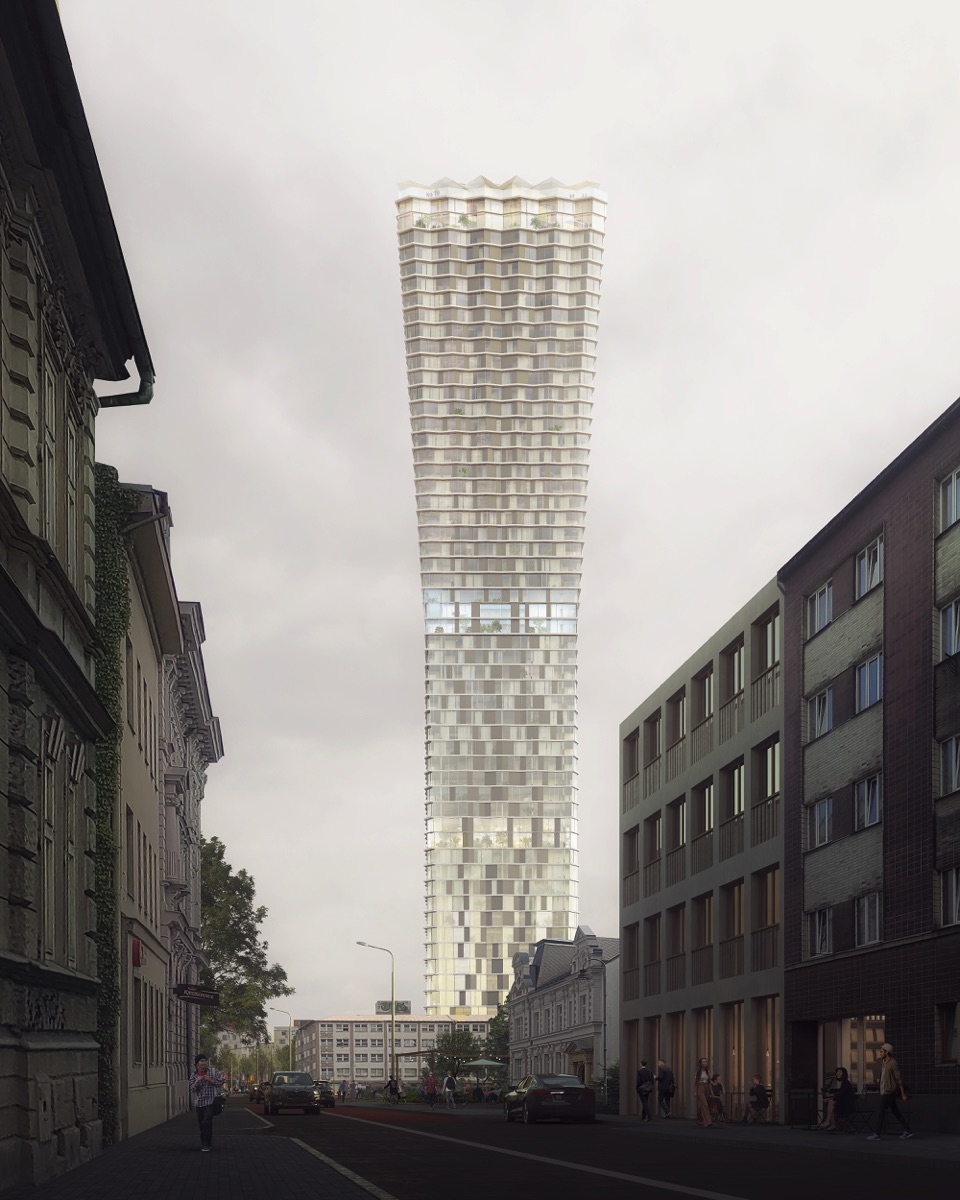 With its design for Ostrava Tower, CHK respond to the rejuvenation of the city and its social needs. The 56 storey skyscraper reflects on the studio’s dedication to rehabilitate the city center and activate public space within the tower and its immediate surroundings. The iconic X-liked shaped structure and with it, its diagonal geometry, unifies the entire building, allowing its alternating levels of publicly accessible functions and private facilities to act in harmony. Shifted on its own axis, the design of the building composed of a complex set of alternating walls and its glass façade, supports the multipurpose functions and enables the residential units’ expansive views of the city and the surrounding landscape, while also providing privacy and substantial living space. 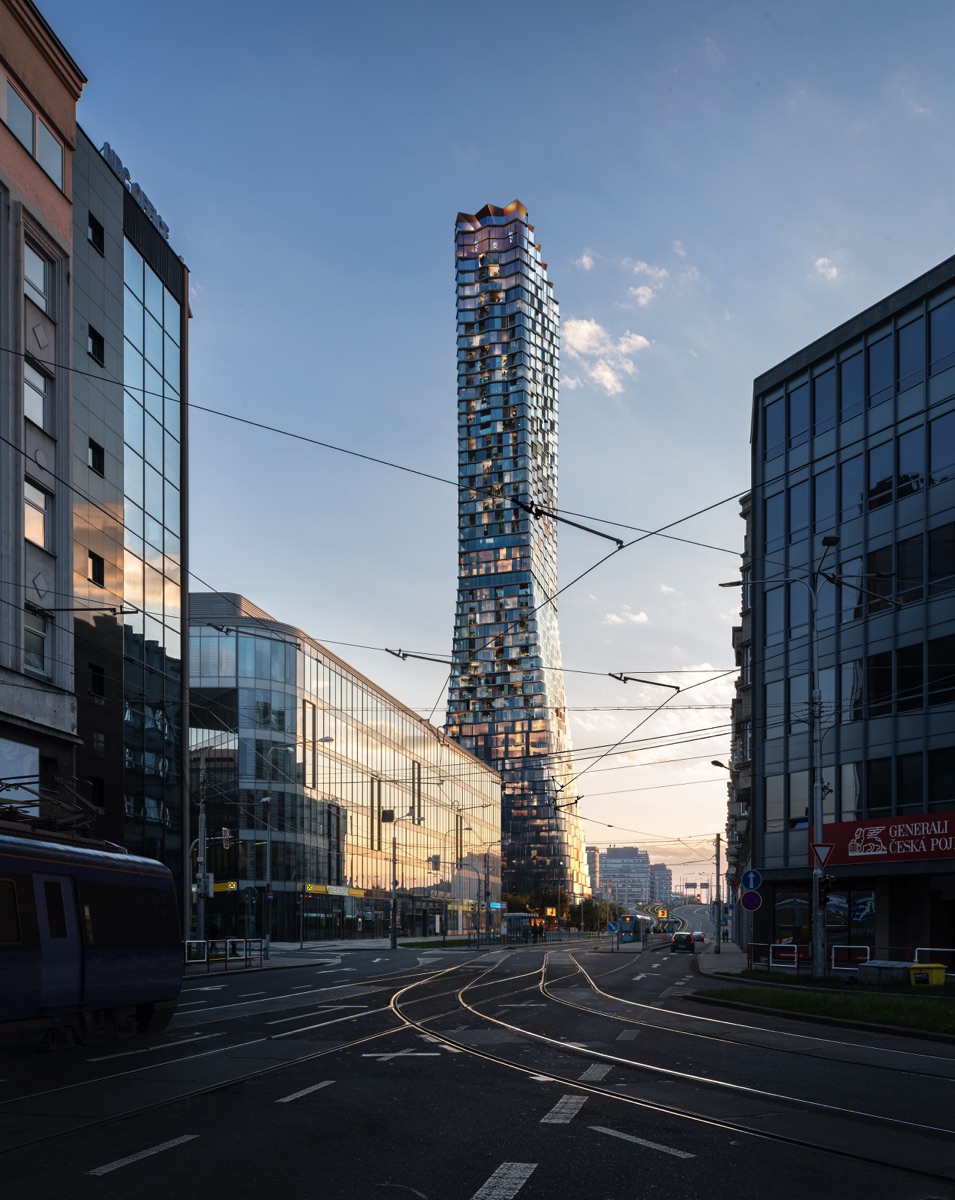 The shape of the building expands out, creating the most stunning views of the city with its sky garden, while simultaneously level zero connects the lobby to its new square, acting as an extension of the building’s role in expanding and activating public space. The outside is designed and built in such a way that it correlates to the scale and purpose of the inside spaces. Specifically, the architects draw attention to the lower ground area and the sky garden at the top as the two widest spaces of the building and their use as recreational spaces. Dispersed throughout the building, the public space includes offices, a congress centre, retail services and a hotel. The panoramic rooftop with a café, a restaurant and a bar open to the general public. 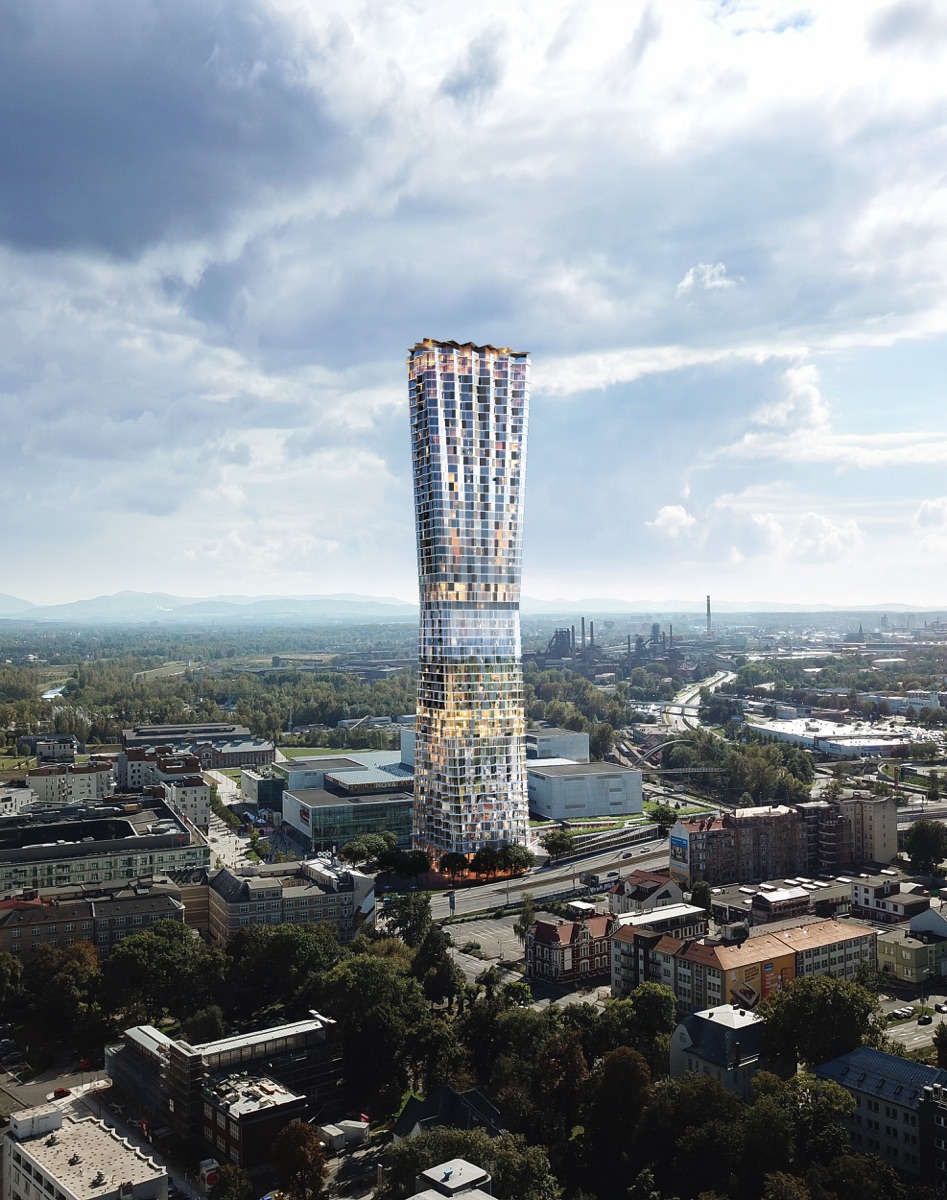 “Rethinking the typology of the skyscraper and its function to serve the public and activate the urban environment, creating positive social impact was one of core missions. The studio’s intention was to create a simple but powerful form that acts as a beacon into the city center.” 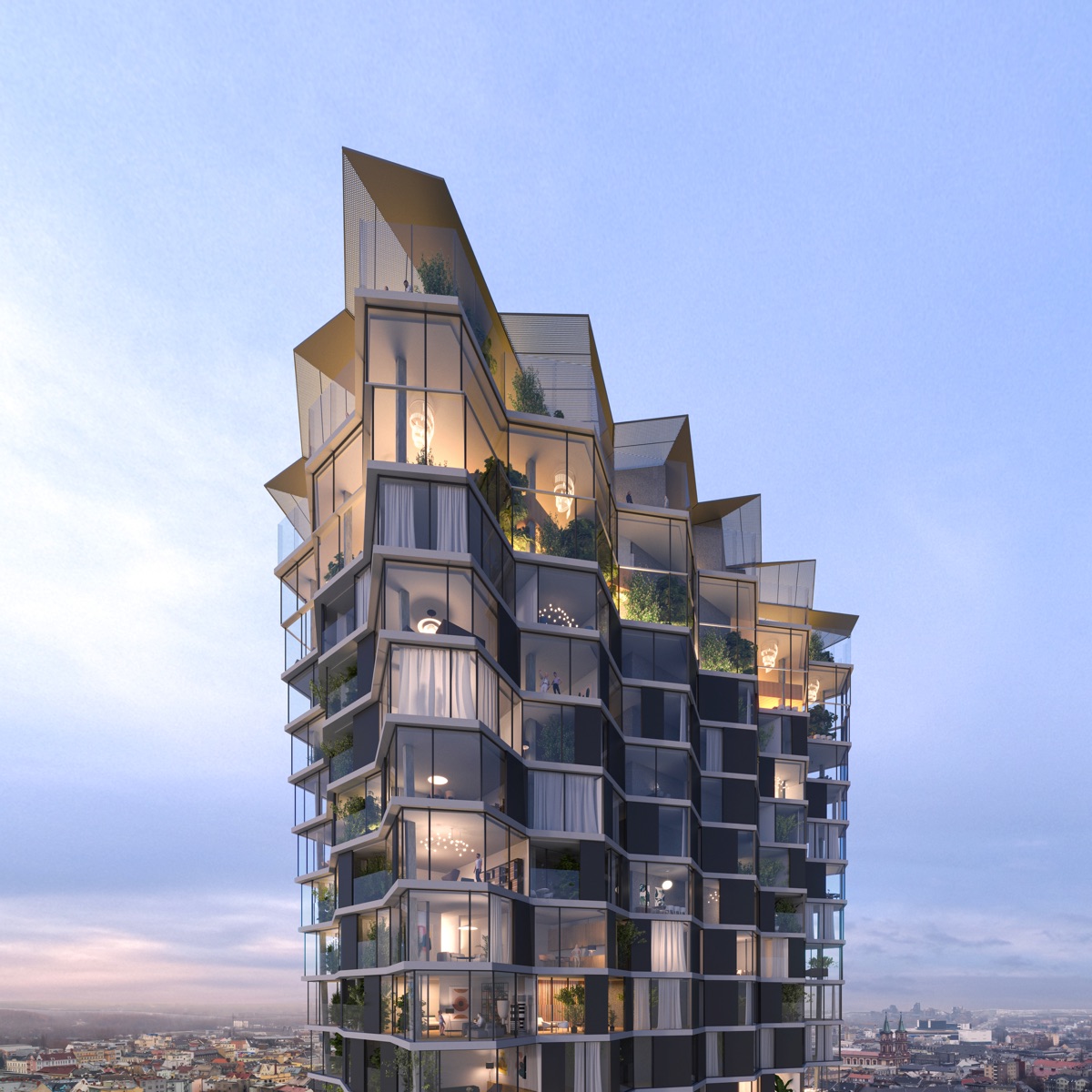 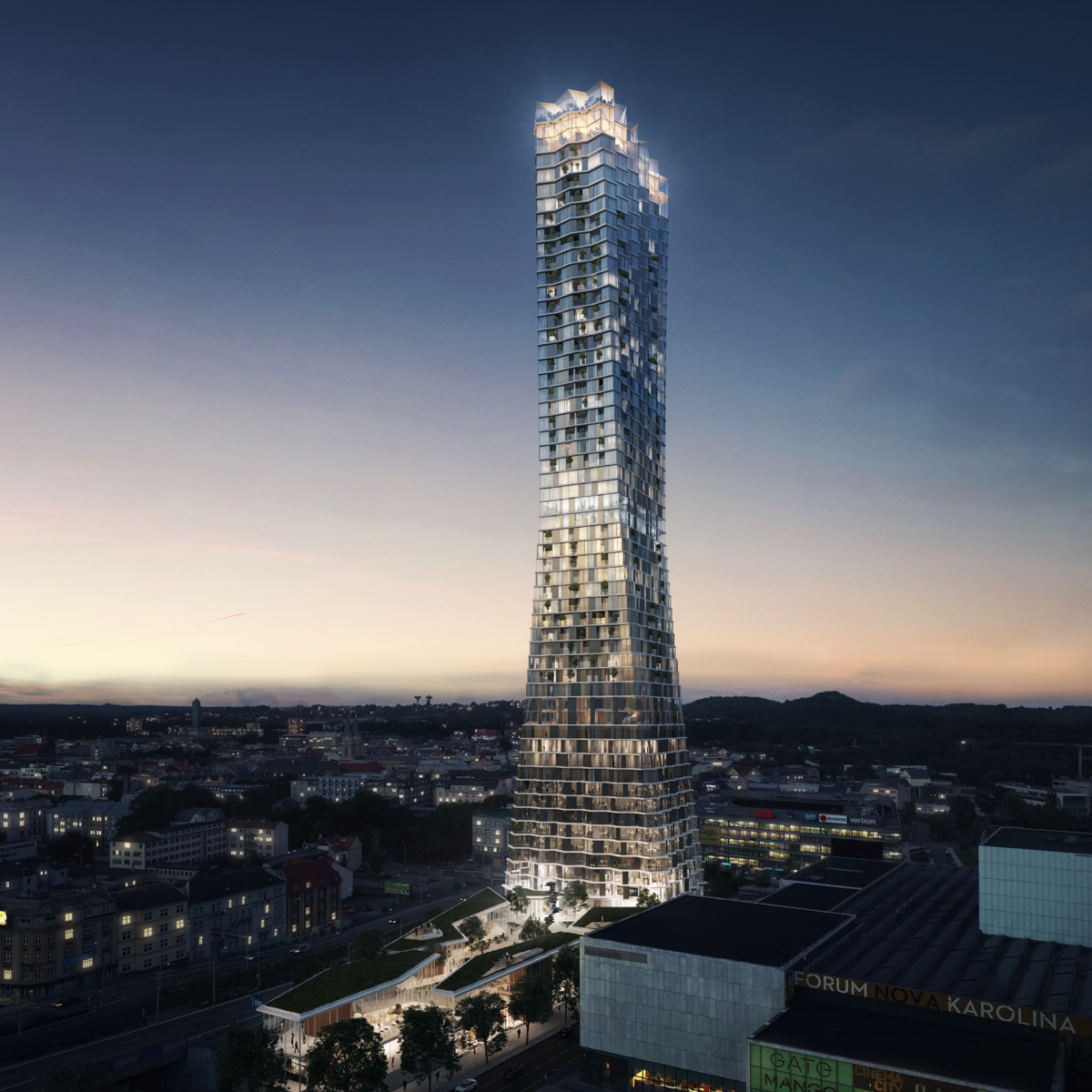 Situated on a vast piece of land that was once created by previously resolving a large-scale traffic artery and its links to the city, the tower acts as entry point into the city’s center and will act as a hub for business, culture and leisure in Ostrava. Connected to a bus terminal and situated at the foot of a bridge, the new design expands the ground floor plaza, shaping itself to increase the amount of public space available on the site. The pedestrian entry is entirely barrier-free, accessible from all sides and visible from all angles, and becomes a major point of attraction, in turn redefining the flow of the abandoned territory into a linked urban portion of the city centre.

Due to be completed in 2027, Ostrava Tower echoes the town’s industrial heritage and inspired utilitarian architecture. This project by CHK underlines the importance to rethink and adapt the typology of the skyscraper as a multifunctional entity, transforming the design into a dynamic social hub, responsive to the contemporary social needs and the rehabilitation of developing urban cultural economies.

CHYBIK + KRISTOF is an architecture and urban design practice founded in 2010 by Ondrej Chybik and Michal Kristof. Operating with 50+ international team members and offices in Prague, Brno and Bratislava, the practice aims at creating bridges between private and public space, transcending generations and societal spheres. Taking into account local histories and environmental specificities, the studio works on a wide array of projects, ranging from urban developments to public and residential buildings. Recent projects include: the Czech Pavilion at Expo 2015 (Milan, Italy), Lahofer Winery (Czech Republic), Zvonarka bus station (CZ) or Multipuropose arena in Jihlava (CZ). The studio has been awarded a number of prizes including the 2019 Design Vanguard Award from Architectural Record, and was recently amongst the European Centre for Architecture Art Design and Urban Studies’ 2019 40 Under 40 Award winners.