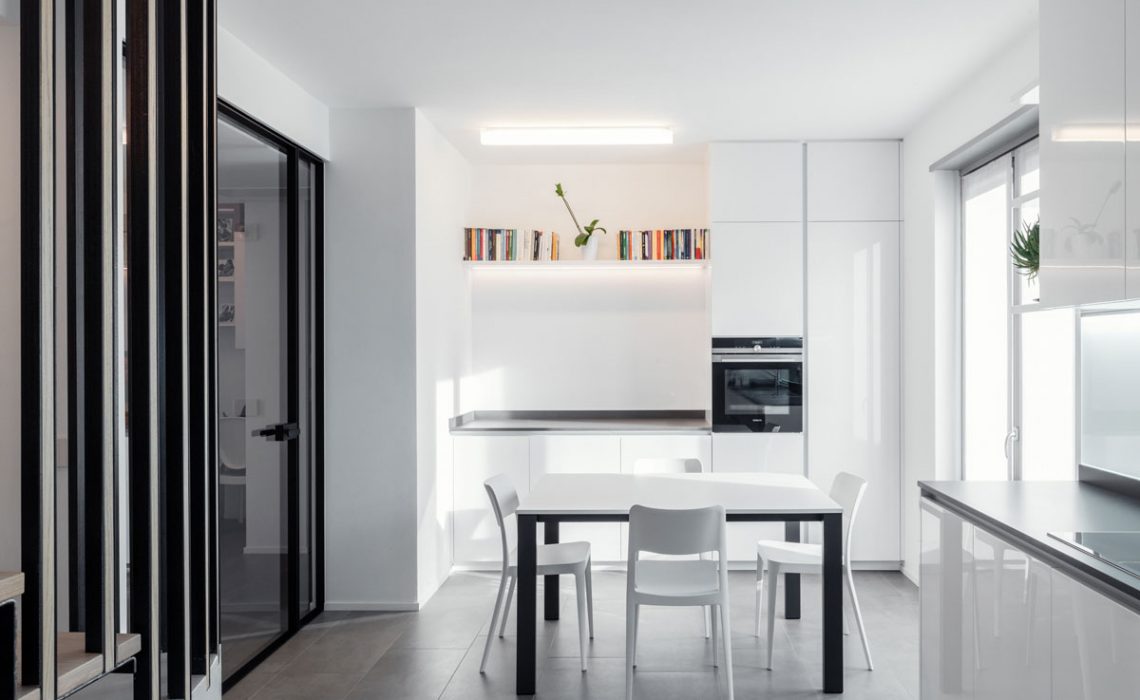 A young couple with small children, finding themselves faced with the need of more domestic space for their family, had purchased a new real estate unit on two levels, the second to be used as a sleeping area with exposed wooden roof, connected by a narrow prefabricated staircase centrally located between the kitchen and the service toilet.

The distribution of the rooms, albeit rustic, was already in place on both floors, as well as the presence of the already installed underfloor heating system which created some difficulties in renovating the entire apartment on the basis of new requests of the client.

The design approach has thus evolved in the tailoring methods of the “cut and sew”, enhancing the pre-existing non-changeable ones and providing targeted demolition, reconstruction and integration works that could give a new distribution structure and new life to what already existed, in an attempt to create a young, sparkling and human-sized context.

In order to give more space to the rooms, in an attempt to ensure a visual continuum that would break the classic and obvious sectorialization dictated by the presence of the dividers, an open space spatial distribution was chosen, with the entrance acting as central filter area capable of mitigating the transition from kitchen to living room (and vice versa).

A false ceiling was created that could cut out this volume within the larger one in the living area, also hosting targeted indirect lighting that could adapt with this diversification and changeability to the different needs that the users would encounter during the course of the day. 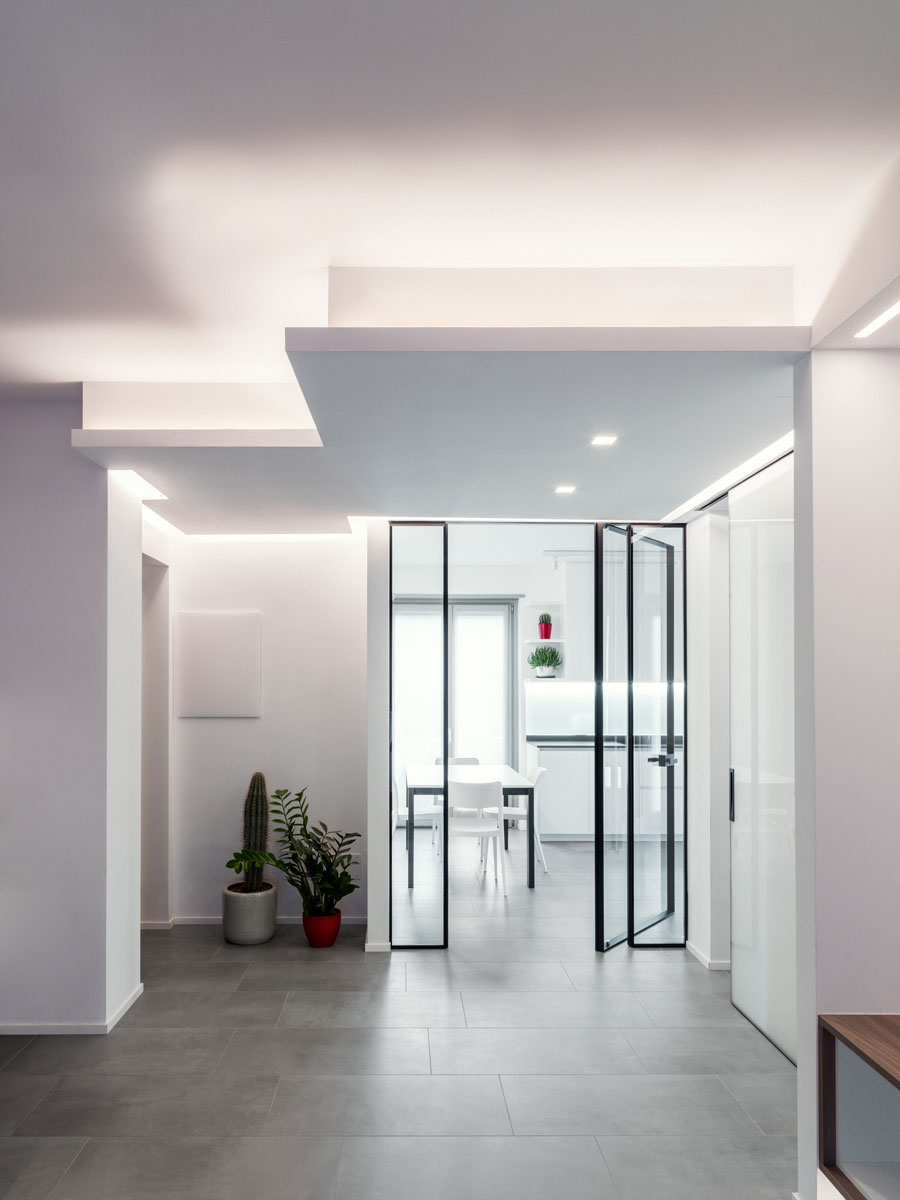 One of these resided in the owners’ desire to separate the kitchen from the adjoining living room for privacy, while maintaining the ability to control their children who spent their free time here playing, drawing and reading. 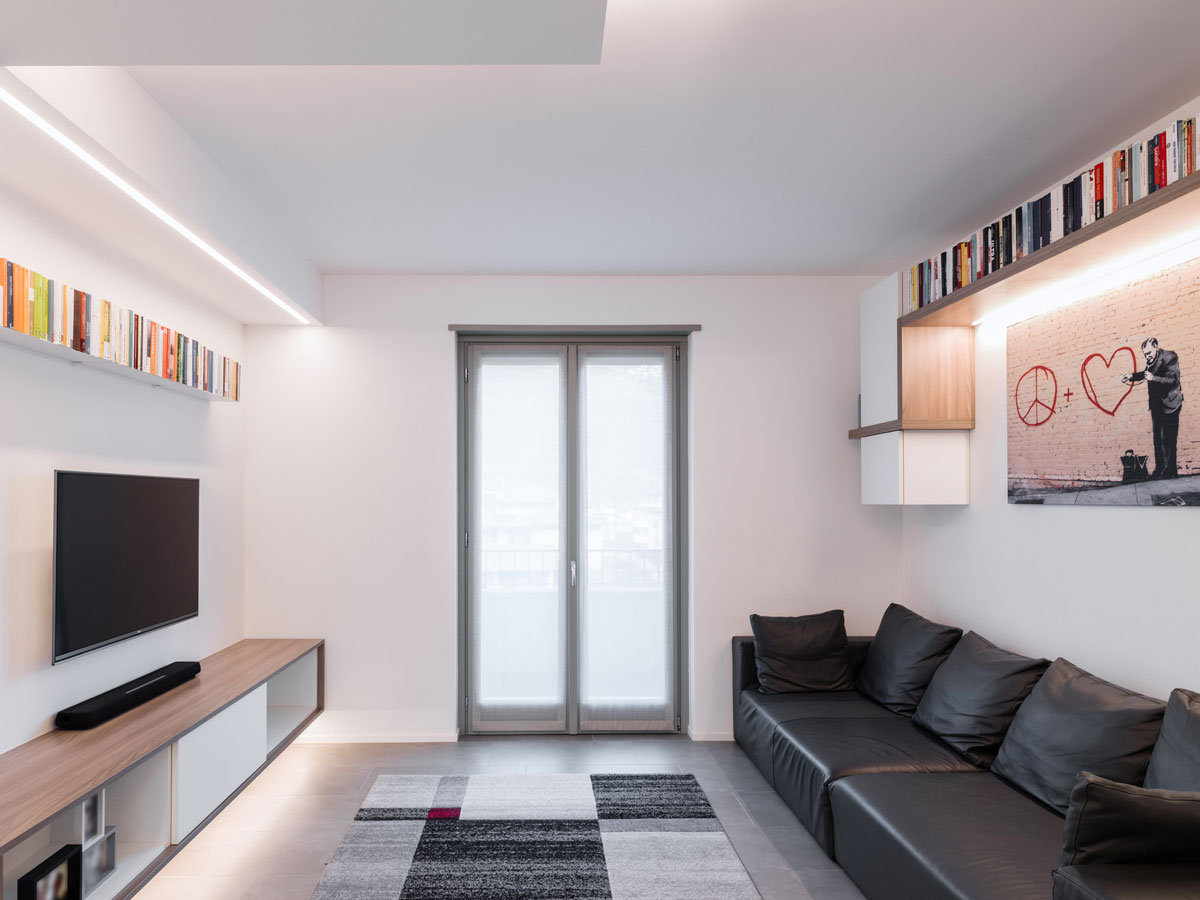 View of the living room

This environment is in fact multipurpose, being able to count on each of the two long sides respectively of a suspended furniture with television and bookcase above, equipped with dedicated lighting that could enhance the volumes and the geometric rigor, and on the opposite wall, a container furniture equipped with a wooden shelf which, articulating on the wall, generates movement by turning its course downwards in the end, and then turning into a small desk with study corner. 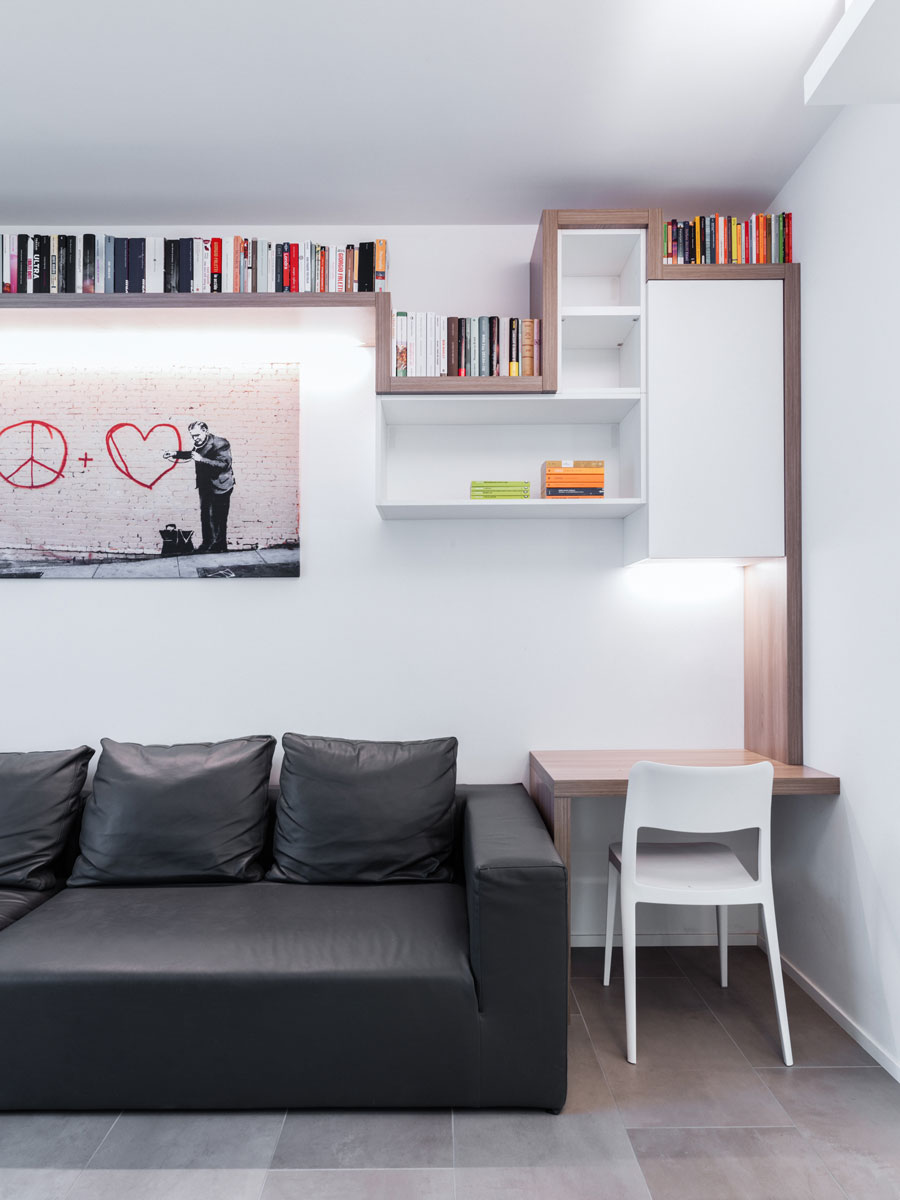 The choice therefore fell on this glass wall equipped with a minimal black frame which in addition to being a frame, could bring out the glass, here considered as an element of division and at the same time of transparency and permeability. At its center there is a full-height pivot door, without hinges, well-recognizable once opened in its entirety, but perfectly concealed when closed, thanks to the minimal handle provided.

The kitchen, located to the south, is deliberately organized here on its perimeter sides, so as to be able to leave the largest usable space in the center of the environment where the only piece of furniture is represented by the isolated dining table, to be understood conceptually as an element for family meeting and reunion. 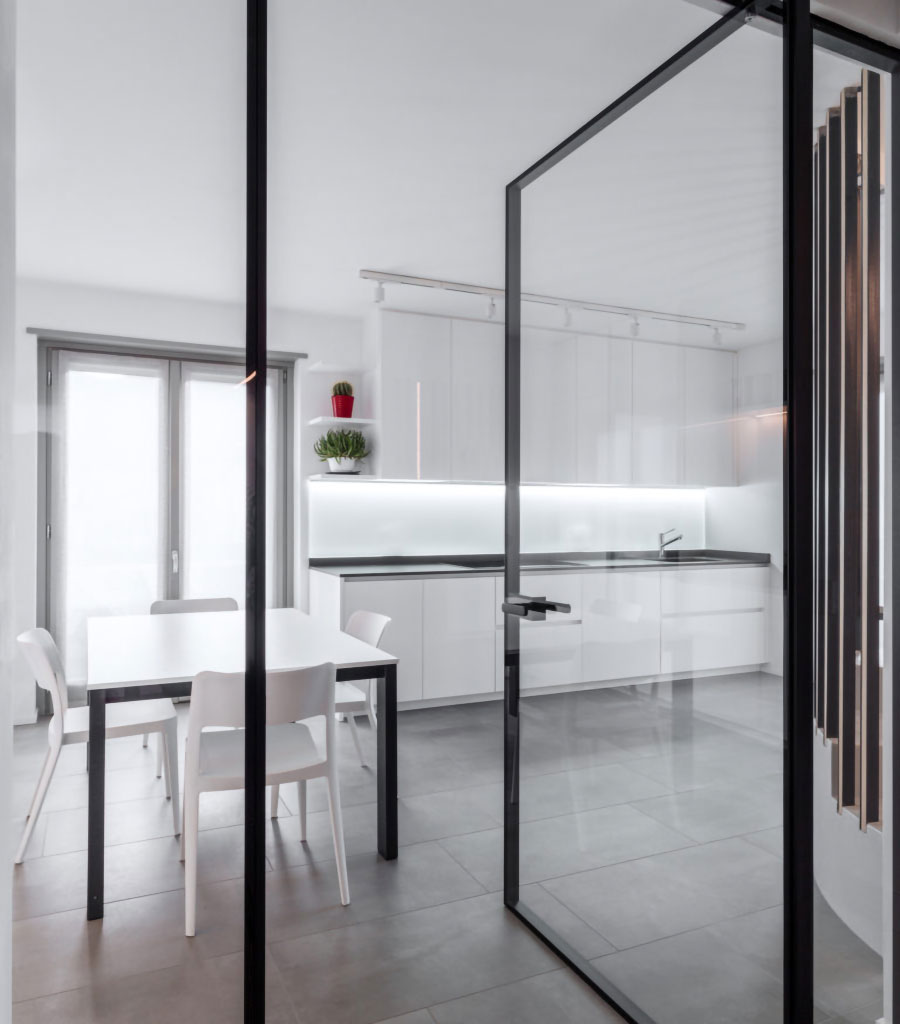 It was also conceived as compositionally and chromatically neutral, playing on a glossy white coating with dark top, the perfect frame of the element to be understood as the fulcrum of the entire project around which the various environments are articulated in a synchronized coexistence, that is the suspended staircase.

This design element created according to the architect’s design, appears here as a reinterpretation of the original, prefabricated staircase, closed inside the compartment dedicated to it, embedded in a narrow and light-free environment, from which it takes only the same position and trend, now showing its truest guise, that is as the fulcrum element of the project, totally involved in the environment that surrounds it.

Particular attention was paid during the design phase in the sorting of the materials, their positioning and how they could coexist without one prevailing over the other, ensuring a correct balance between the parts: the iron that represents the supporting soul here, left to the raw and protected only with a layer of transparent, the wood that characterizes the treads and the vertical connection and suspension elements, the resin base that continues below it creating a shelf, consequently showing its multifaceted characteristics.

It should be noted that the first rise of the iron structure was deliberately not carried out, in an attempt to confer lightness and suspension, in total contrast with the heaviness and grounding of the underlying part where the further steps are obtained. In order for the staircase not to appear to the user as constituted by two elements detached from one another, vertical uprights were used with the aim of creating a connection between the parts, thus giving the idea of ​​cohesion and uniqueness. 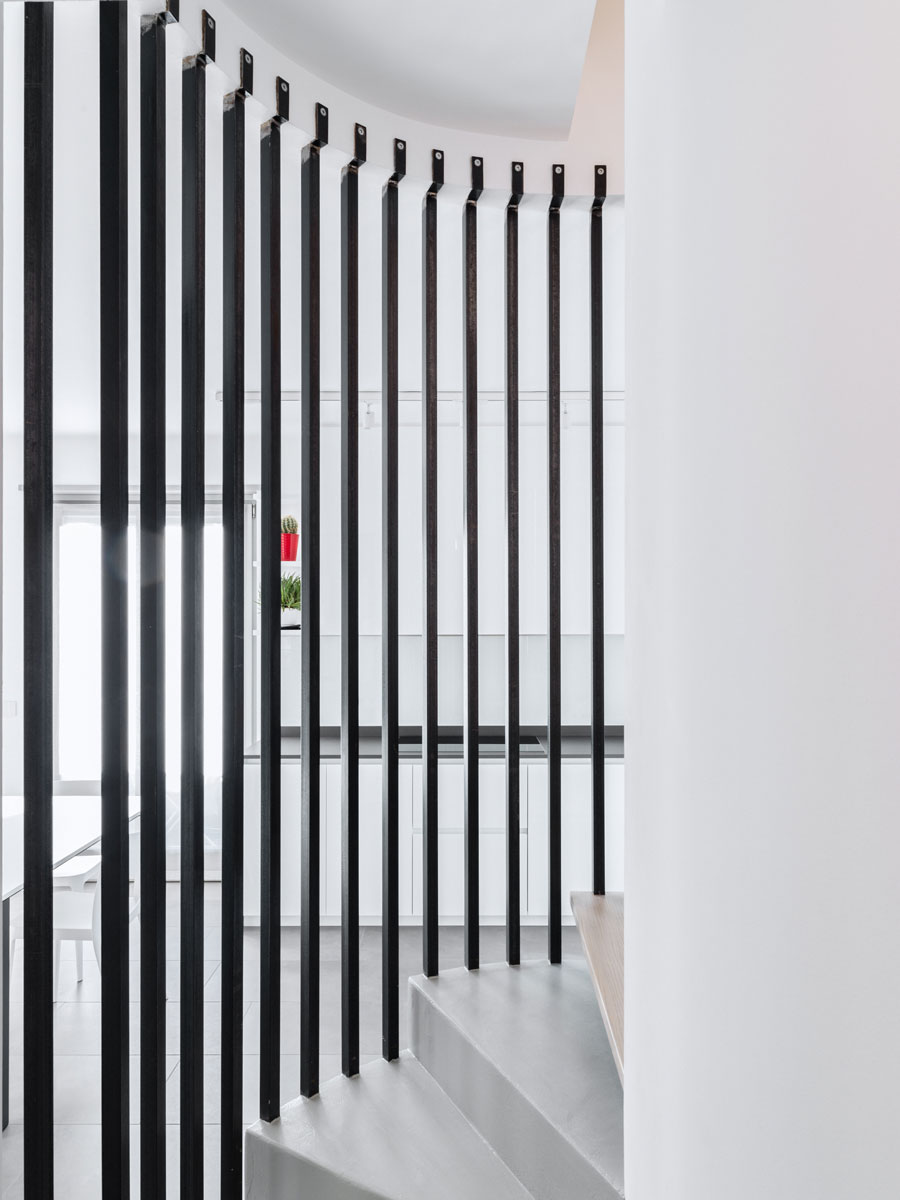 As evidence of the fact that the staircase is now an element perfectly inserted in the context, it can be observed how in the service bathroom of the living area its circular ascent pattern, here emphasized by the use of the white color on a dark background, is perfectly stated, succeeding to coexist harmoniously with the half-height tiles that cover the perimeter walls. 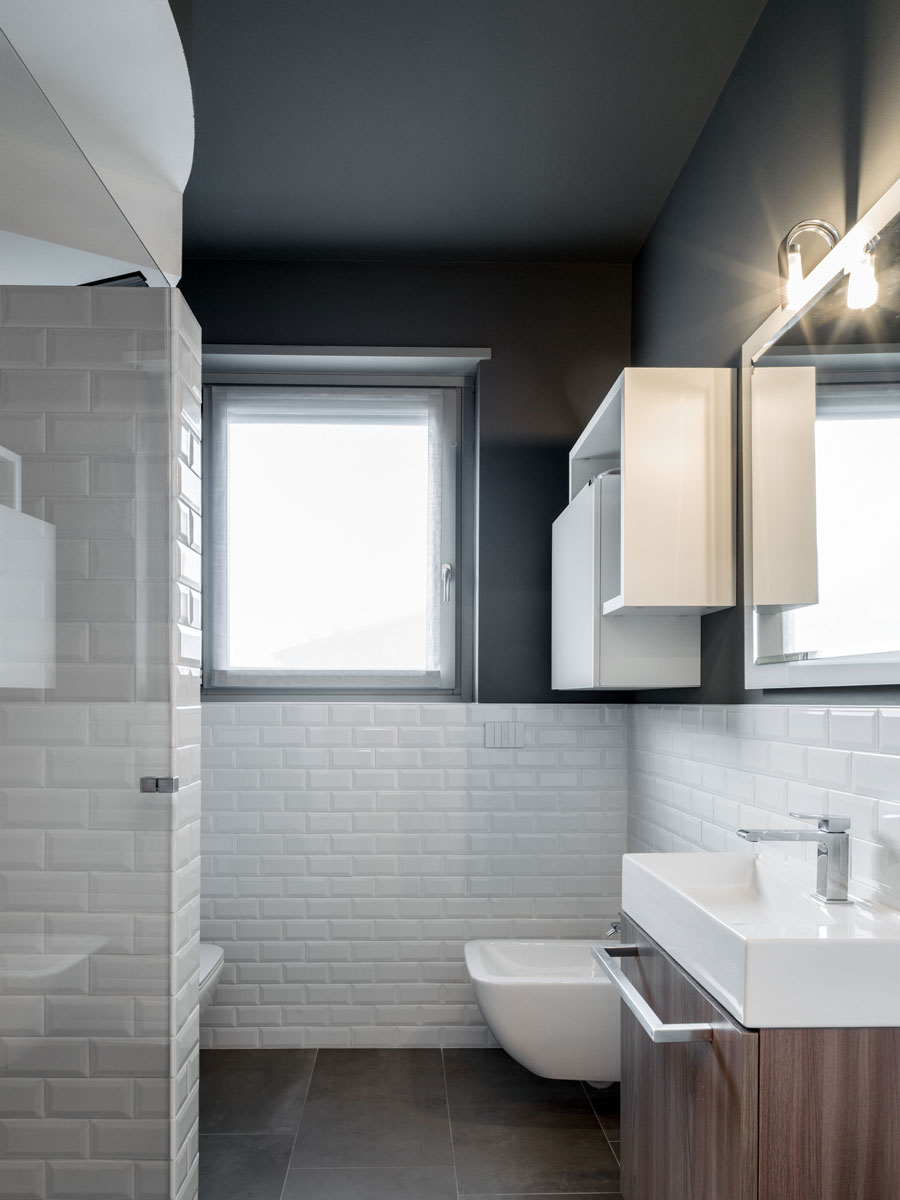 View of the bathroom in the living area

The choice and location of the light at the service of architecture and shapes also appears to be fundamental, proposed here in the form of vertical LED strips aimed at recalling the iron and wooden uprights, accompanying the user on his ascent to the sleeping area.

This is the most private and intimate part of the house, characterized by a warm and human-sized climate, also thanks to the presence of the exposed wooden roof, here suitably painted with a light layer of white without this covering it completely, making thus emerge knots and veins, consequently emphasizing its material effect.

It consists of a central corridor that guarantees access to each individual room, with the presence of a small balcony protected by a full-height glass window that provides a privileged view of the suspended staircase below to the home owners, also allowing the light from the living area may rise, also giving a consequent sense of breadth. 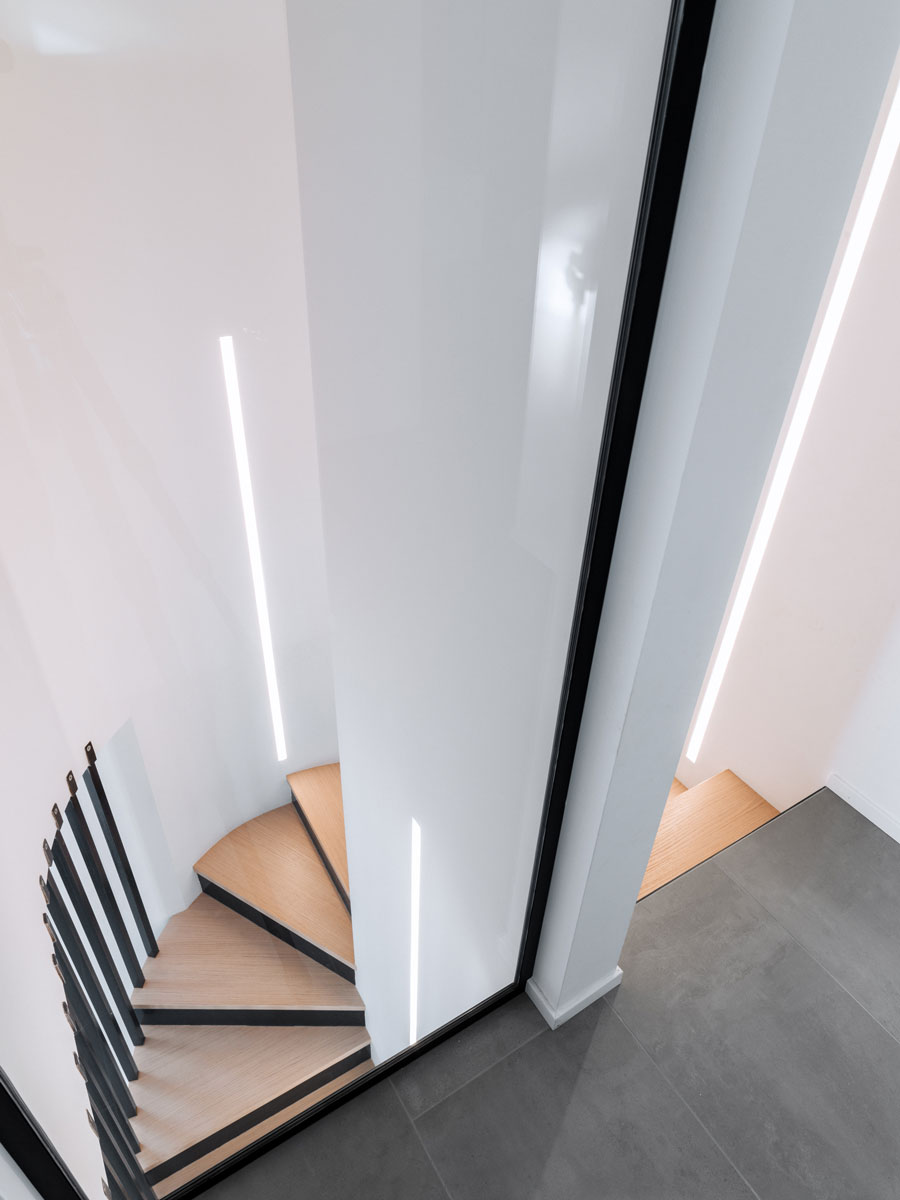 View of suspended staircase from the sleeping area

The master bedroom appears essential in its spatial organization: in the center we find the suspended bed which gives the idea of ​​floating and of being totally supported by the boiserie behind it, deliberately dark in color, equipped with a dedicated perimeter LED lighting aimed at emphasizing this effect, while behind it is placed the walk-in closet, essential in its minimal forms. 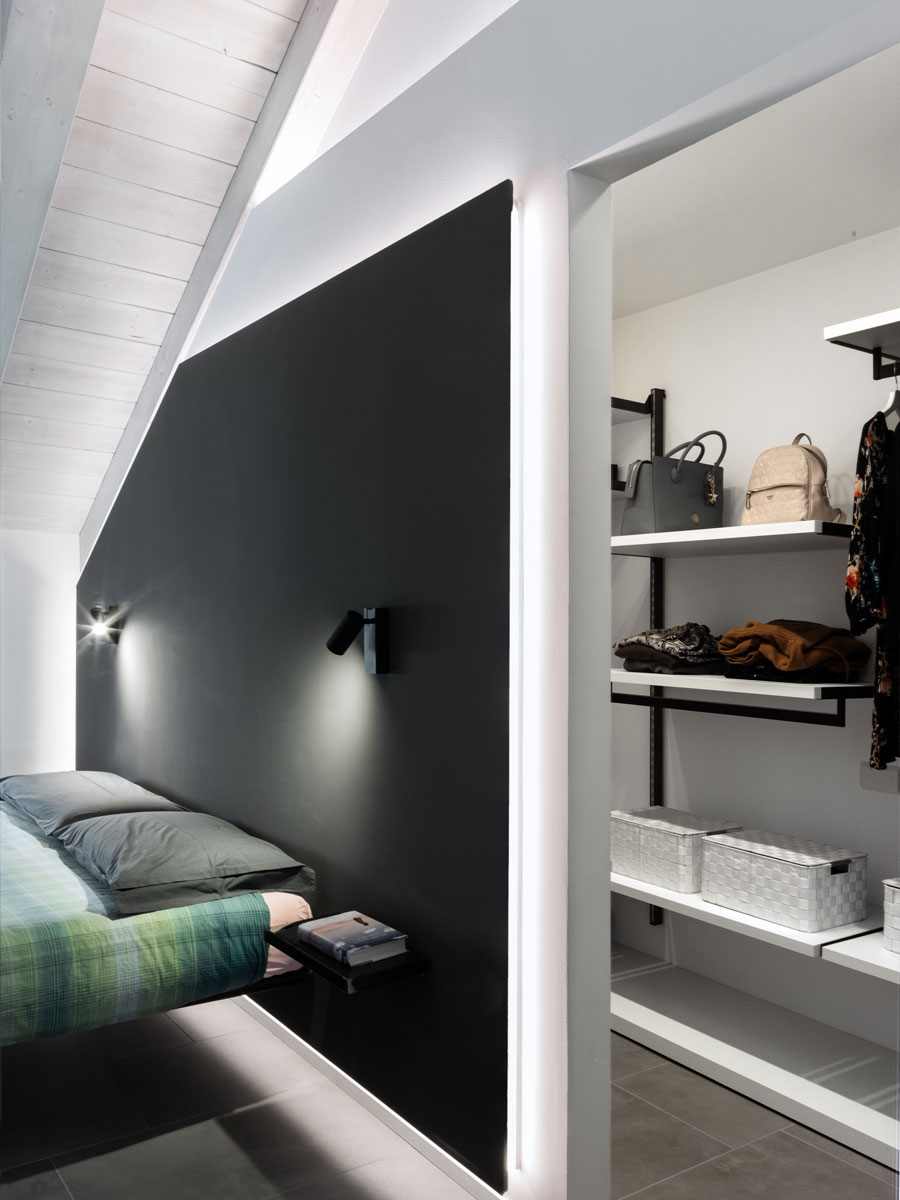 View of the master bedroom with the walk-in closet behind

The children’s room takes up the same concept as the previous one, revisiting it through the design of a custom-made piece of furniture that followed with its volumes and its geometric rigor the oblique course of the wooden roof without ever crossing it, so as not to mix with it, but enhancing its shapes and respecting its presence. 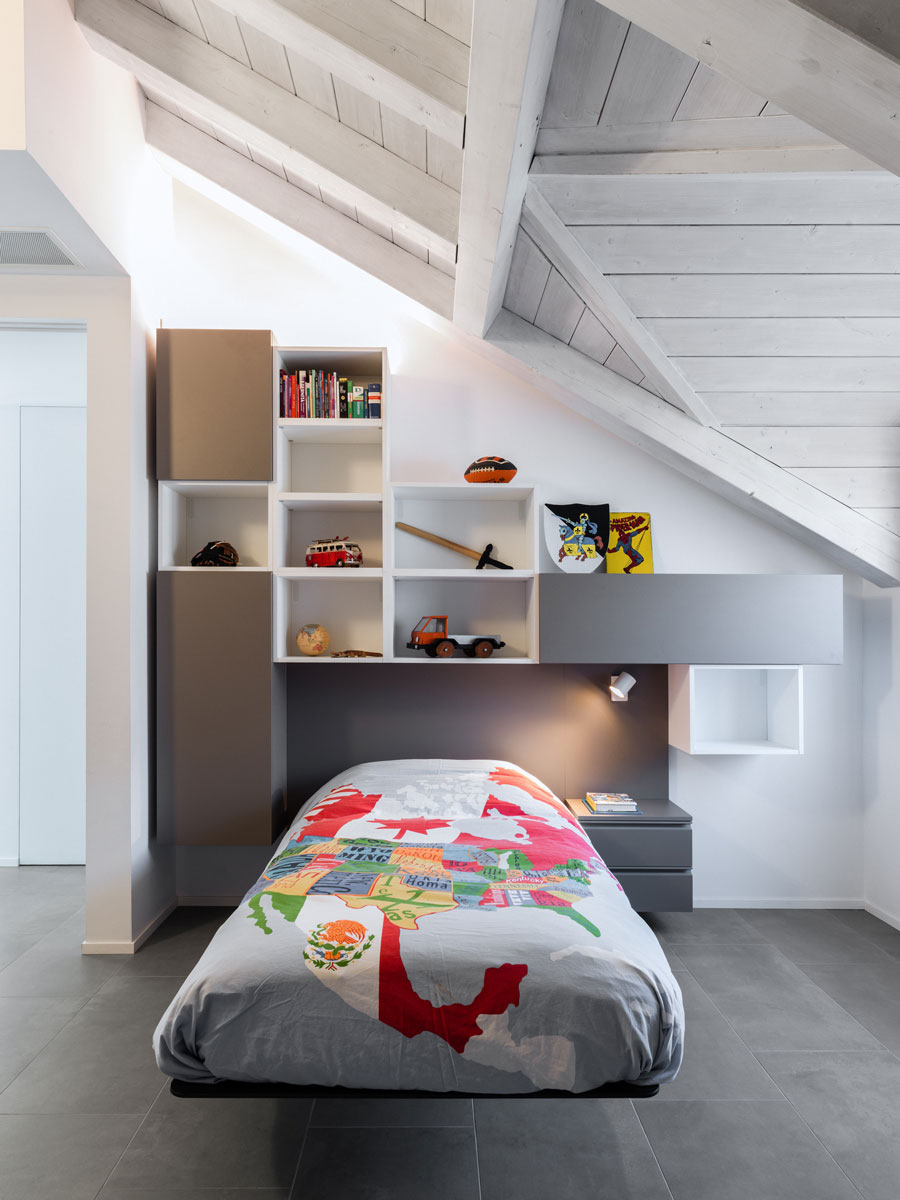