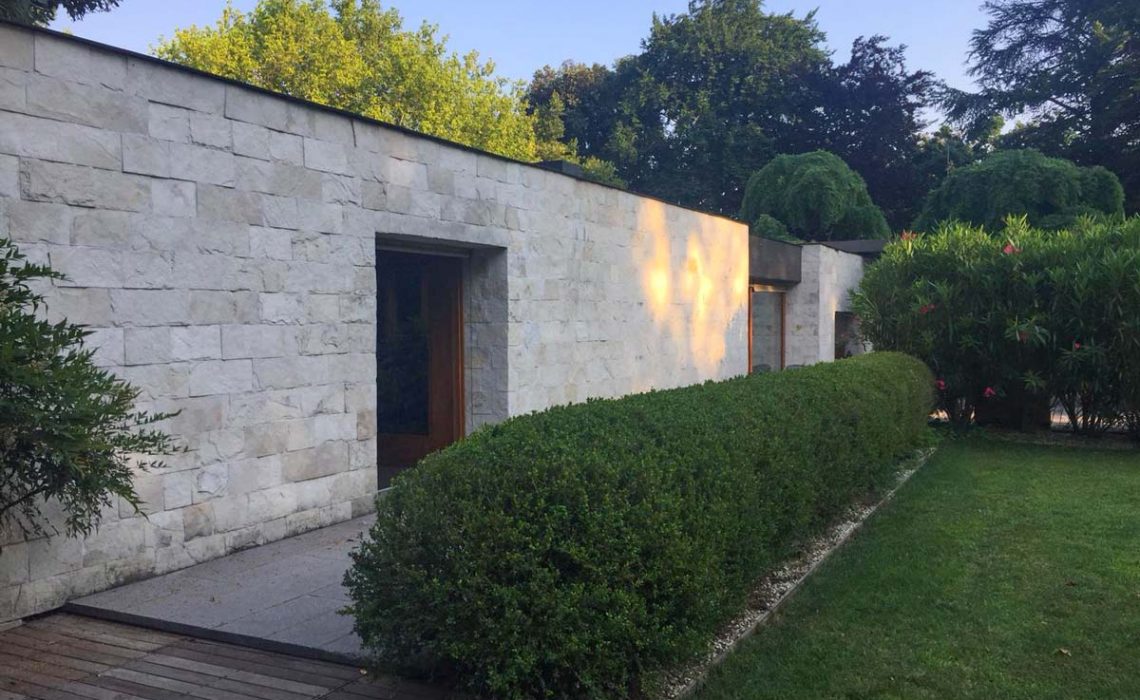 THE WALL: THE HOUSE AROUND A TREE

Private housing project in a park in Villorba (Tv)

The part of the territory of the Municipality of Villorba, called Carità, where the project of the villa is inserted, appeared to be almost unbuilt until the end of the Second World War. It was involved with the only presence of some buildings related to the typology of the rural building or of the “Villa Veneta” inserted in large parks or vast cultivated plots.

Following the construction of the new Town Hall in the 1960s, the portion of the territory was affected by a progressive building phenomenon. The typology of almost all the buildings can be related to the archetype of “single-family house”, most of the times designed and built according to the typical rules of the post-war speculative phenomenon. 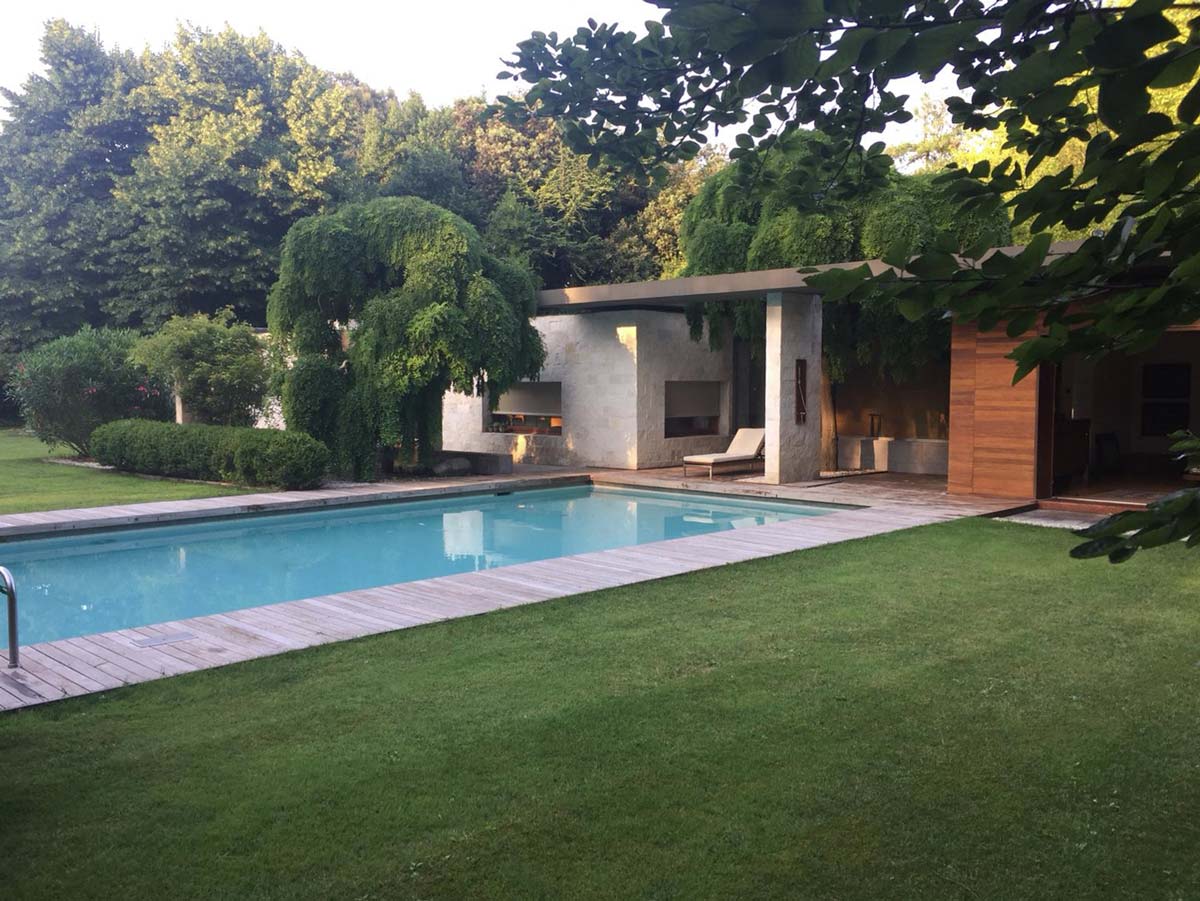 The villa was built from 1998 to 2000 in a vast portion of a park where a small greenhouse adjacent to a vegetable garden, used as a shelter for potted plants during the winter season, existed at the eastern end.

The greenhouse was part of a large compendium composed of a large villa with outbuildings built after World War II in imitation of the typology of the Venetian villa.

The original buildings were inserted in the park designed and built, together with the construction works, by Mr. Severino Curtolo, an important local agronomist and landscape architect. The manor house was replaced, in the last years of the last century, by a residential complex composed of ten real estate units. 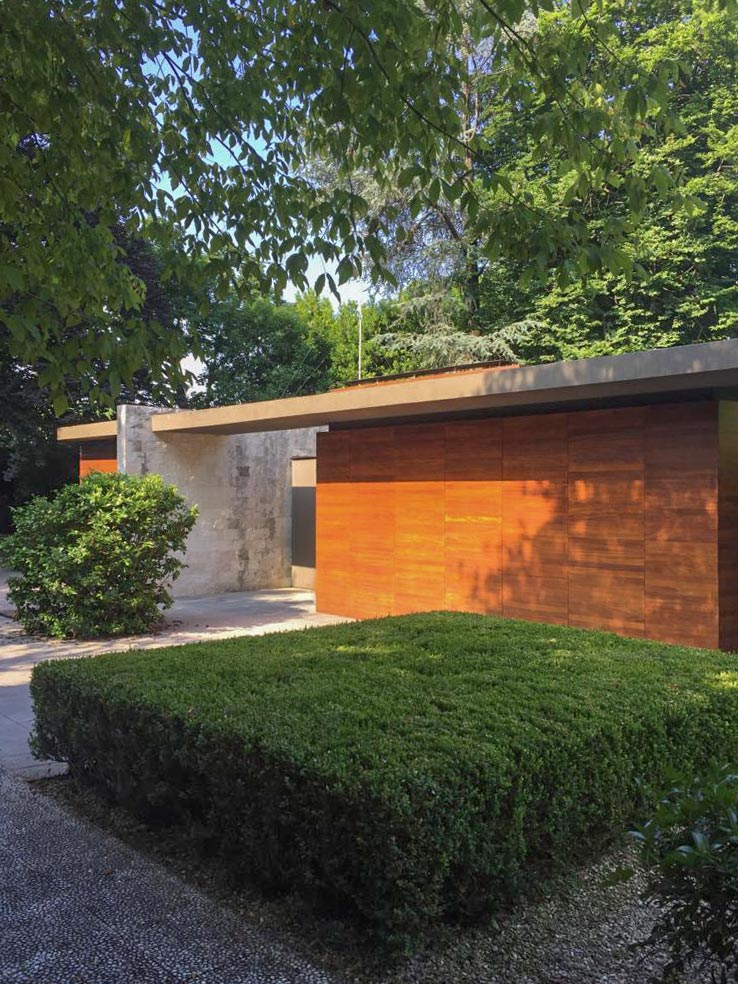 At the same time, the villa was built to replace the greenhouse and the garden area. The “replaced” building, more than the others around, is explanatory of the “formal canons” typical of the construction period characterized by the lack of will to deepen any architectural research.

The extraordinary landscape quality of the park has influenced the design choice that has seen the prevailing valorization of the same over the architectural form of the building. 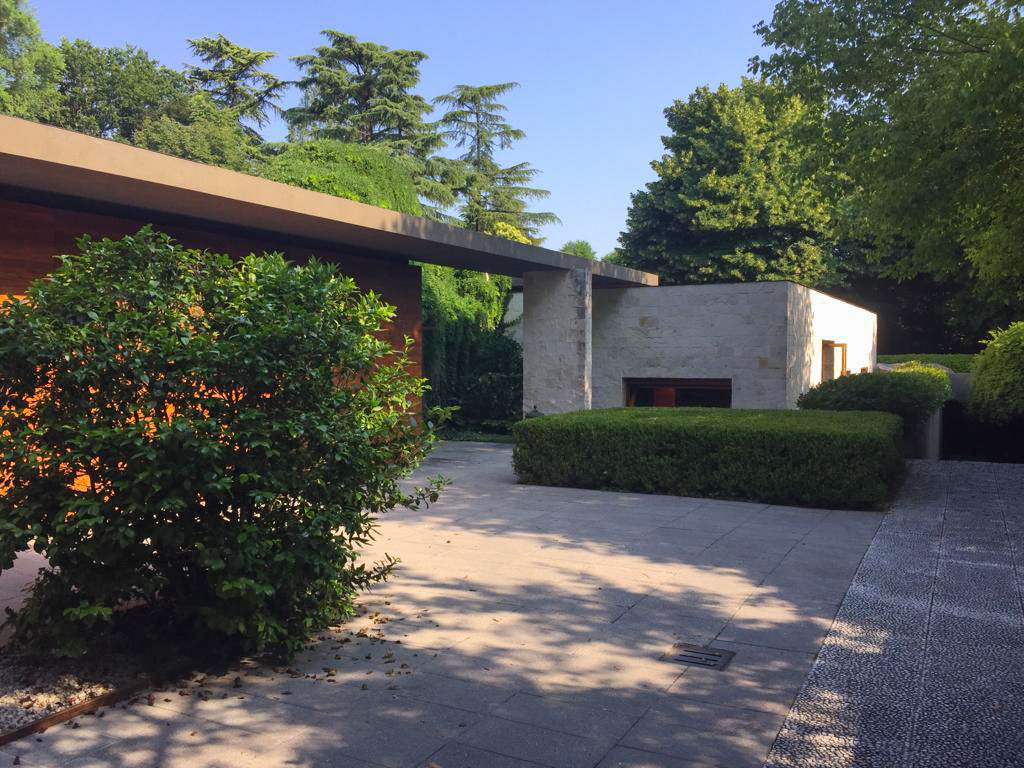 The project does not intend to be configured as a “representative” building, although compositional and finishing elements can be found that could be considered typical quotes from much more famous ancient and modern villas.

The project is nothing but a wall that marks the border between park and refuge area. The wall stops where the great sophora already exists. It surrounds it and creates around it the toko-no-ma of the park. A niche where the sophora is exposed and where it changes the contents of the niche itself with the changing seasons. 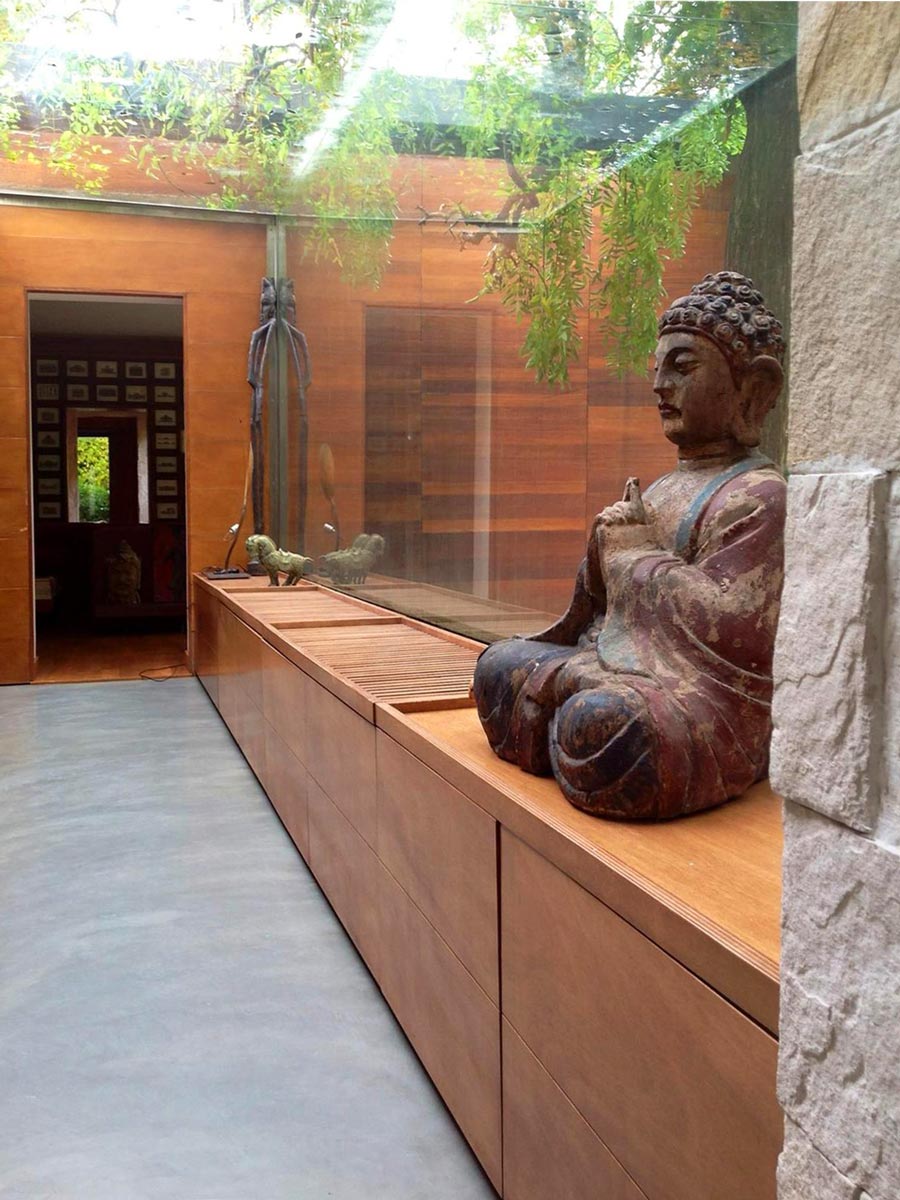 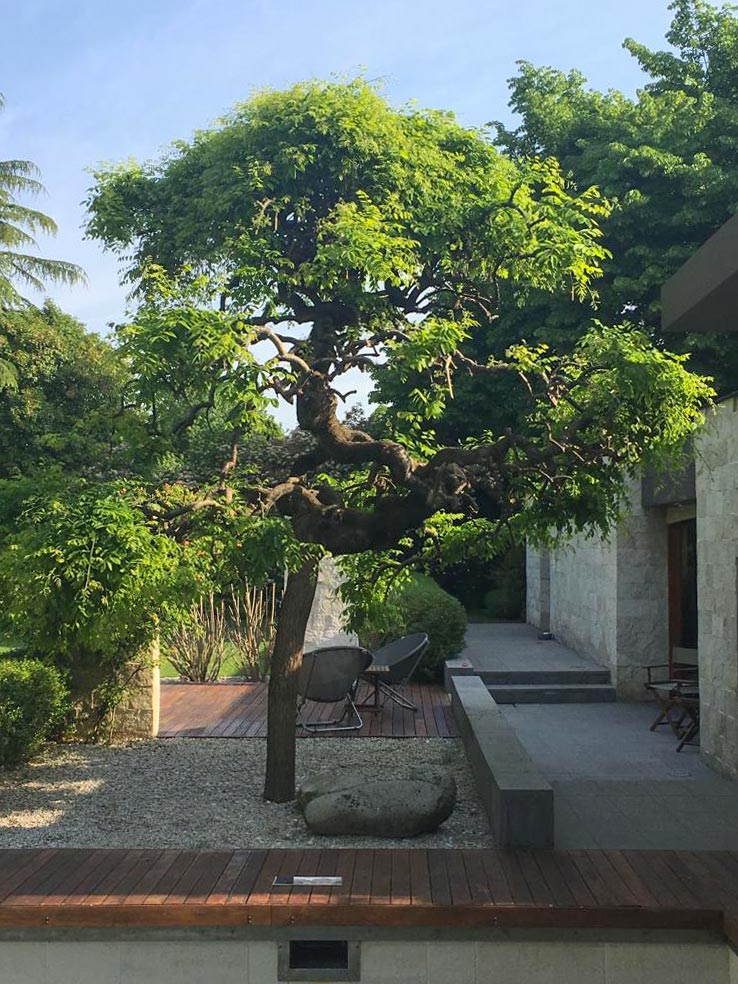 Behind the wall the typical functions of family life are placed in rooms also hidden by evergreen hedges. The wall is interrupted only where there is the need to let the light enter the rooms. The most important rooms have the color of sand and wood and reassuring opaque surfaces. The windows are the toko-no-ma of the rooms. They are niches that change their content with changes in external light, rain or sunlight or the colors of the park. 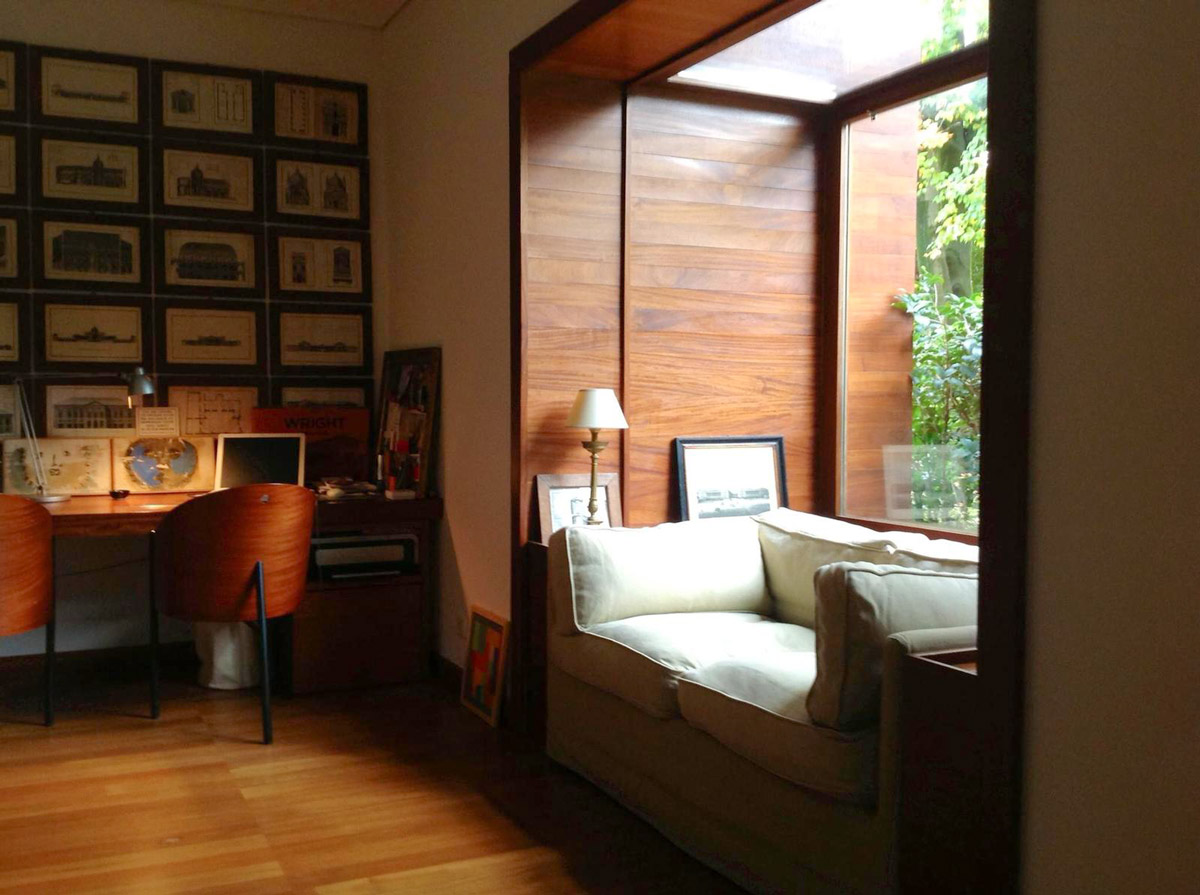 I can’t add anything else and I can’t find other arguments to describe the house I live in. But I believe that this short passage from “Shadow Book” by Junichiro Tanizaki is more eloquent than any other description.

…it is enchanting the uncertain and delicate light that enters and lingers in our rooms, similar to the last glow of the sunset! This reverberation, or rather darkening, exceeds every other decoration for me: I will never tire of contemplating it. In each room, a uniform sanded dye is bathed in light; from room to room, however it varies, almost imperceptibly. Often the smokers are infinitely thin: they are fleeting tints, which seem to change, according to the mood of the beholder. Their gradations give each room a different quality of darkness…