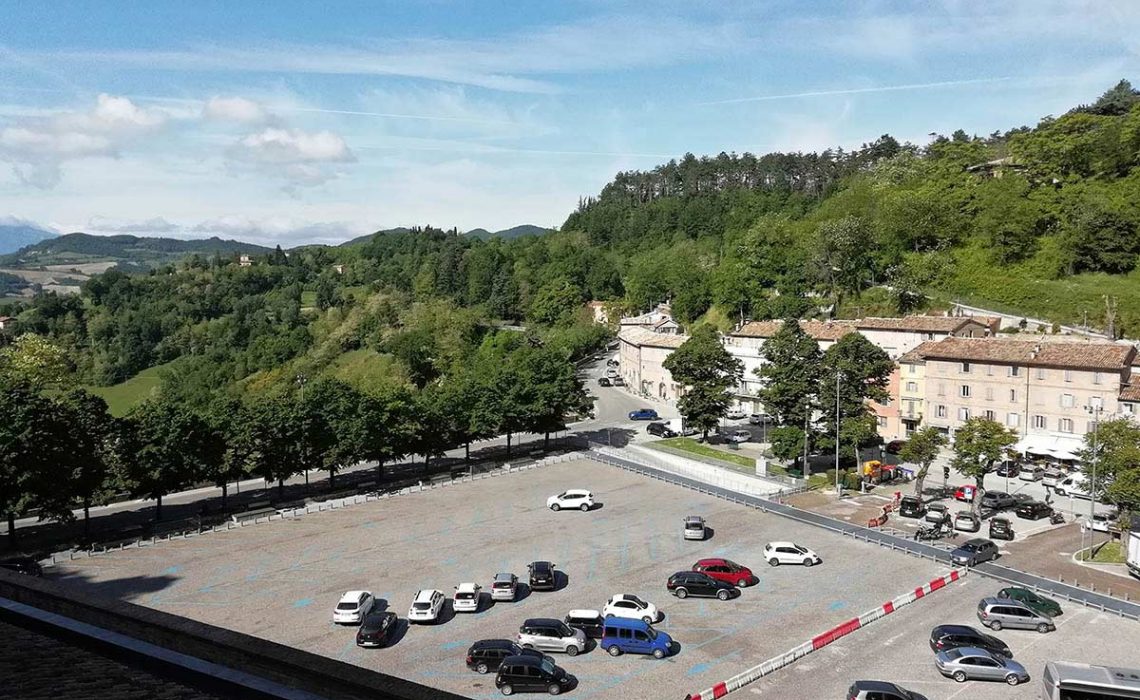 “Squared emptiness”: participating project in the “Mercatale area” international ideas of redevelopment , for the competition by ​​the Municipality of Urbino.

The international competition for the redevelopment of the Mercatale area was launched by the Municipality of Urbino in the Summer of 2018 with the desire to make this urban space accessible to citizens, and, given the position of value of the area, free it from the presence of a very impactful ground level visible parking lot.

In the original project by the architect Giancarlo De Carlo, known as “Operation Mercatale“, the parking lot existed only on the two underground floors while at the ground level a paved surface with rails had been imagined, with sliding mobile flower beds, with plants and trees to be moved according to the different uses (events, markets etc.) given to the square 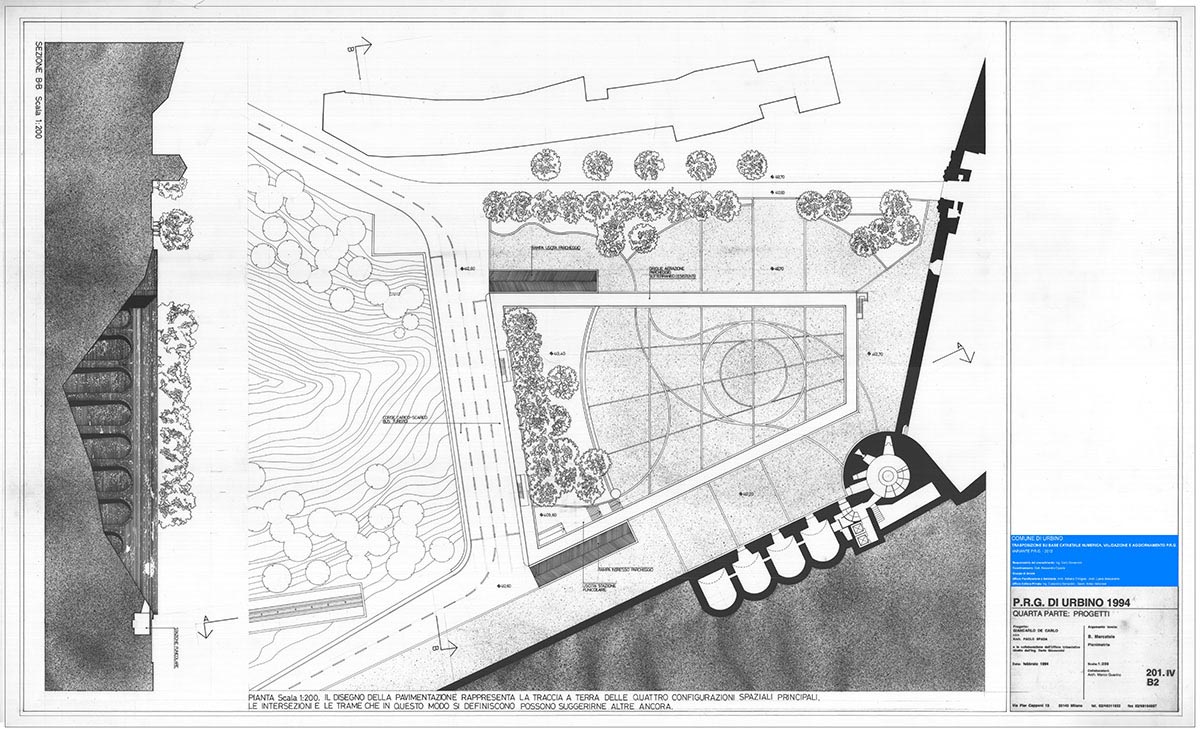 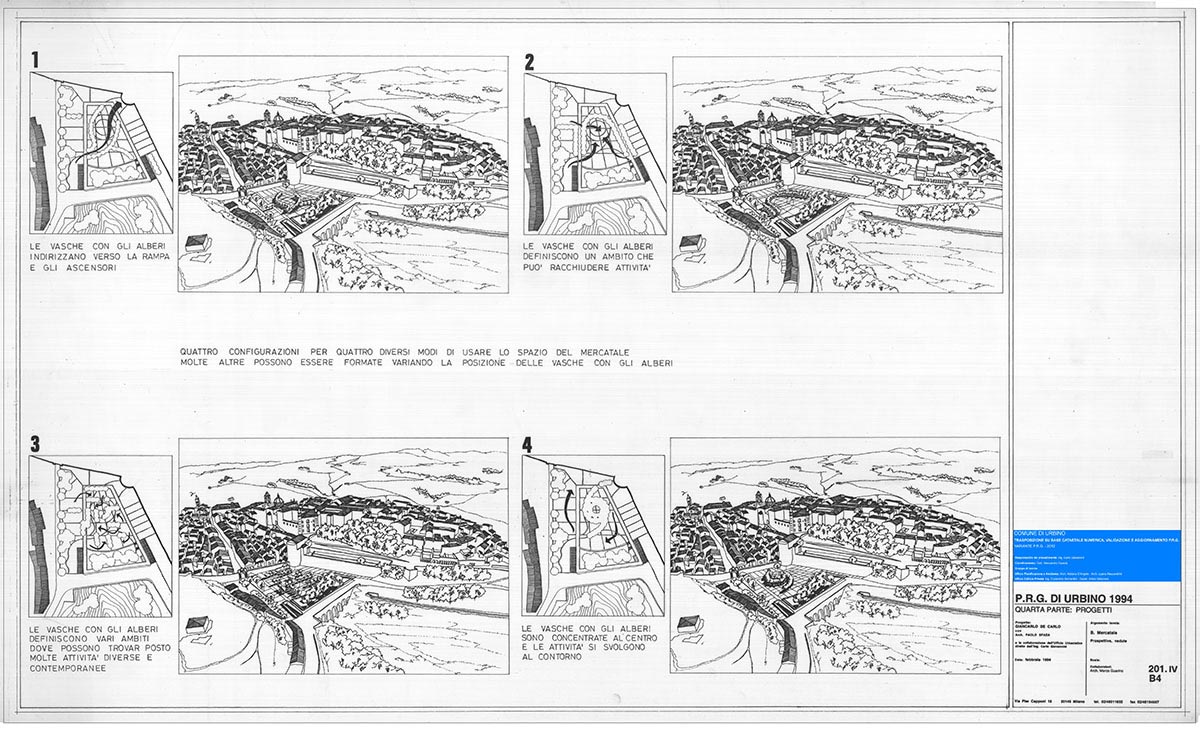 The area covered by this competition is one of the main access gates to the historic center of the city of Urbino; the dynamics of mobility have changed recently with the inauguration of the urban hub of Santa Lucia, with the Consortium parking lot, and with the conversion project of the former Fornace Volponi with its funicular – not yet completed.

The incompleteness of the “Mercatale Operation” did not allow for this area to be configured as the planned urban center, yet, despite everything, it remains of particular interest, as it can be considered a hinge between the historic center and the subsequent development of the city, in particular of the area of university colleges.

The position of the Mercatale is part of a very articulated urban system, confronted with landscape views and urban emergencies; it cannot be thought of as removed from the context, it must be inserted in an overall urban project; it has a barycentric position and its function as an interchange hub is very important since all the routes to reach the other areas of the city unfold from it. It is a large area between two hills that form the backdrop, and it has a privileged view of the landscape that opens up towards the valley from the former railway station. 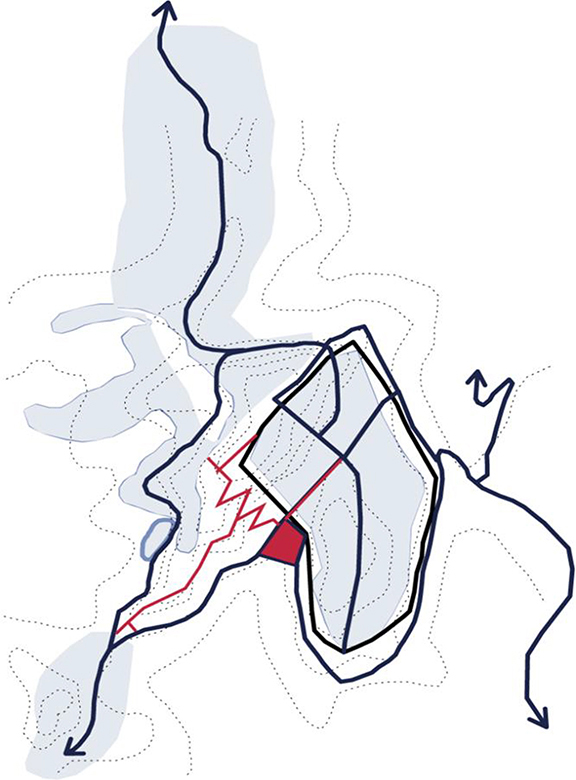 Due to its urban character, the Mercatale acts as a multiscalar system capable of creating relationships between the territorial dimensions and the urban dimensions that are more linked to human activities. Its spatial and functional articulation is not born in contrast with the natural and urban space, but it merges organically with them, and the space that is “not built” does not represent a residual space, but a structuring void that makes the system permeable and fluid. 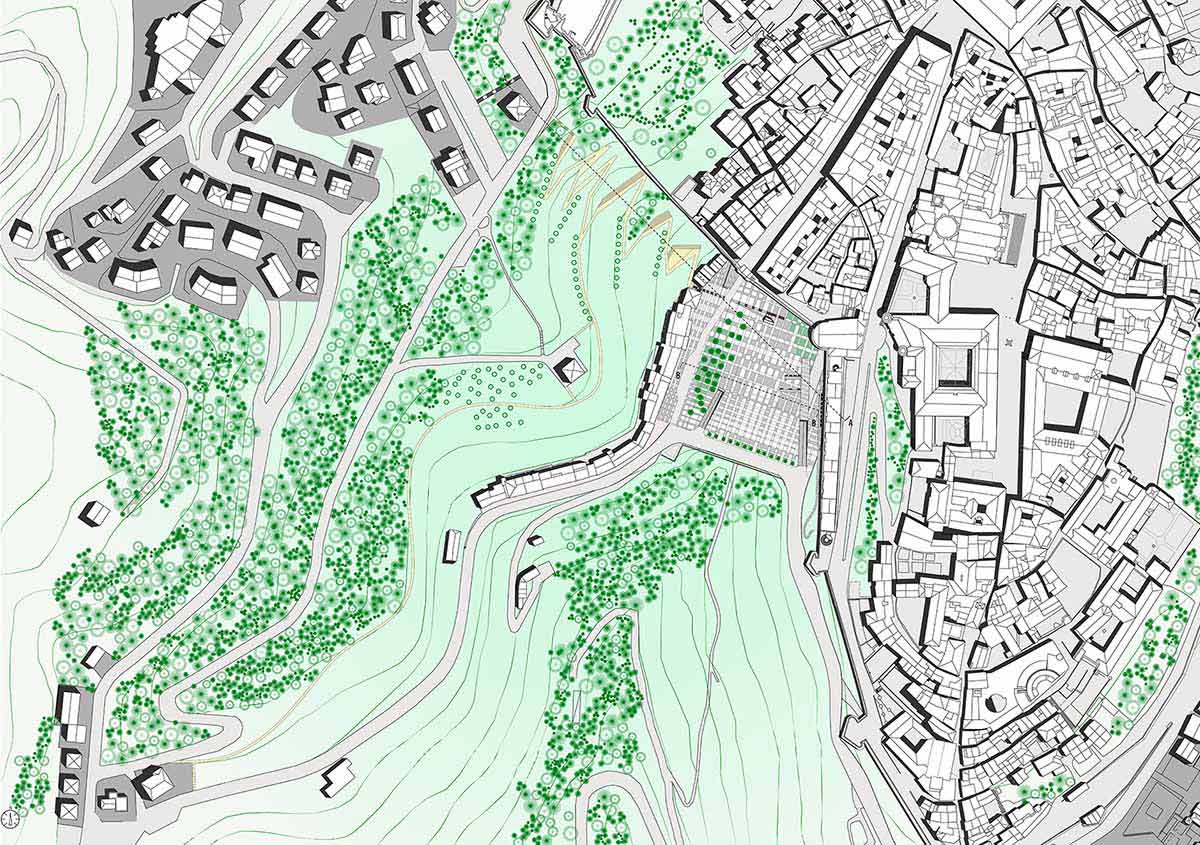 The proposal for the masterplan of the competition area aims to amplify the connection with other areas of the city previously indicated through the redevelopment of the Mercatale as a square and as a meeting point for people, which increases the resonance of exemplary places such as the ramp by Francesco di Giorgio Martini and the Data, and connects them to equally relevant but peripheric areas such as colleges.

The masterplan and the territorial section show that a route has been planned to connect the Mercatale to the Colleges with a safe crossing of the Colle delle Vigne, ending in Via Fratelli Rosselli and Via Francesco di Giorgio Martini. This path, through a series of ramps, also reaches the Resistenza Park, the city’s viewpoint. 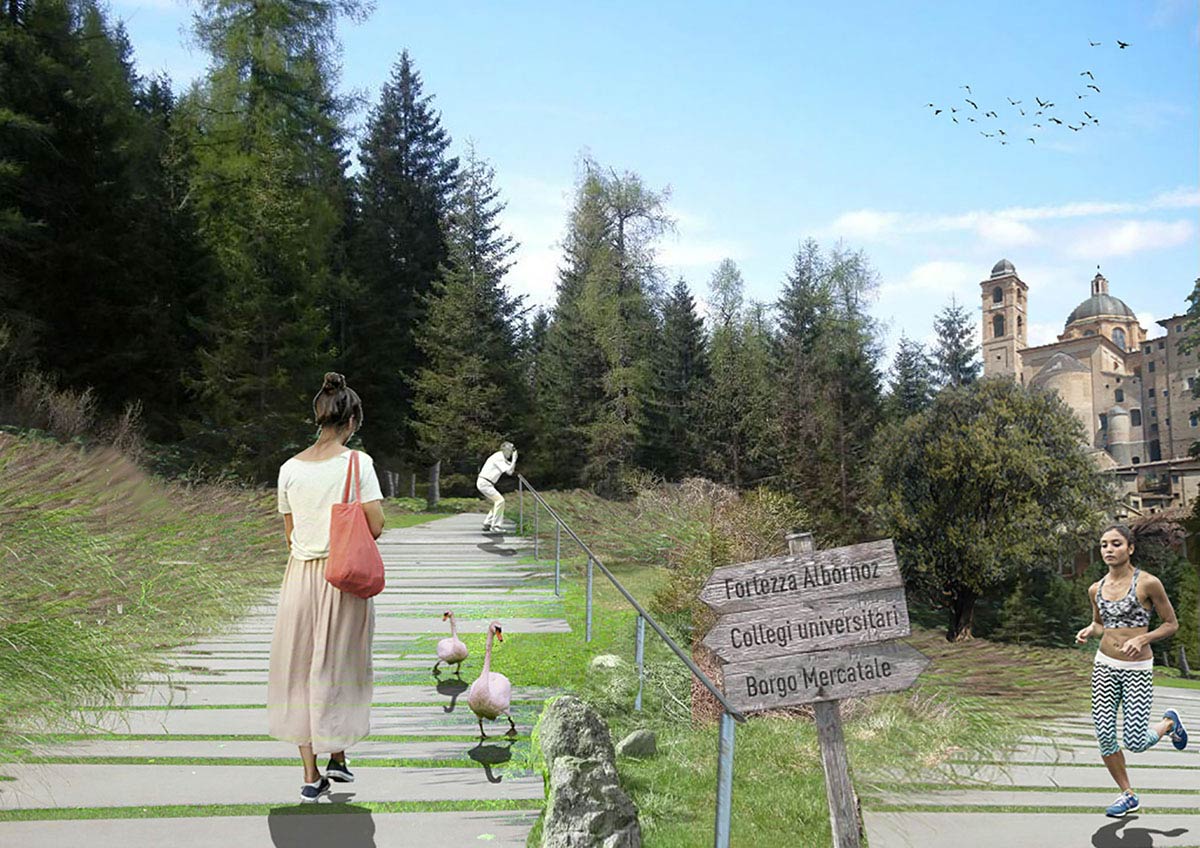 View of the route through the Colle delle Vigne

Some resting and lookout areas are also provided on the sides of the route, which is designed with a topological approach. The path must be integrated into the hill in an almost imperceptible way: a reversible intervention in which, over time, the vegetation would re-appropriate the slope and the interstitial spaces, crowning a project of symbiosis with the landscape and describing a new profile in continuity with the historical center.

This objective can be achieved with draining floors that would not require important work for the construction of the base on which to lay them; in fact, draining layers of gravel and geotextiles under the surface elements are sufficient.

It was also conceived as a path that climbs the hill with slopes that would not aggravate the walkers too much and with some tiered parking areas to make it usable as a belvedere, or simply as a place to meet. The part of the path that leads to the colleges is almost flat and it allows students to safely reach the universities, the Academy of Fine Arts, and Isia.

The most impactful intervention could be the modeling of the profile of the hill with steps, for which we recommend the use of “reinforced earth”, that is, volumes of compacted soil, in which geosynthetic elements are inserted to constitute a real reinforcement . Often, it is possible to use the material present on site as a filling material, gaining both in terms of execution speed and costs. Moreover, the reinforced staircase is introduced into the natural scenario with no environmental variation.

The current condition of the square is that of a structural void that overlooks another, more natural, void; it can therefore be considered a squared void, and this quality must be maintained: a dynamic balance of matter and antimatter. The goal of the project is to eliminate the ground level car park to use the square as a meeting point by finding an orderly system that allows for flexibility. 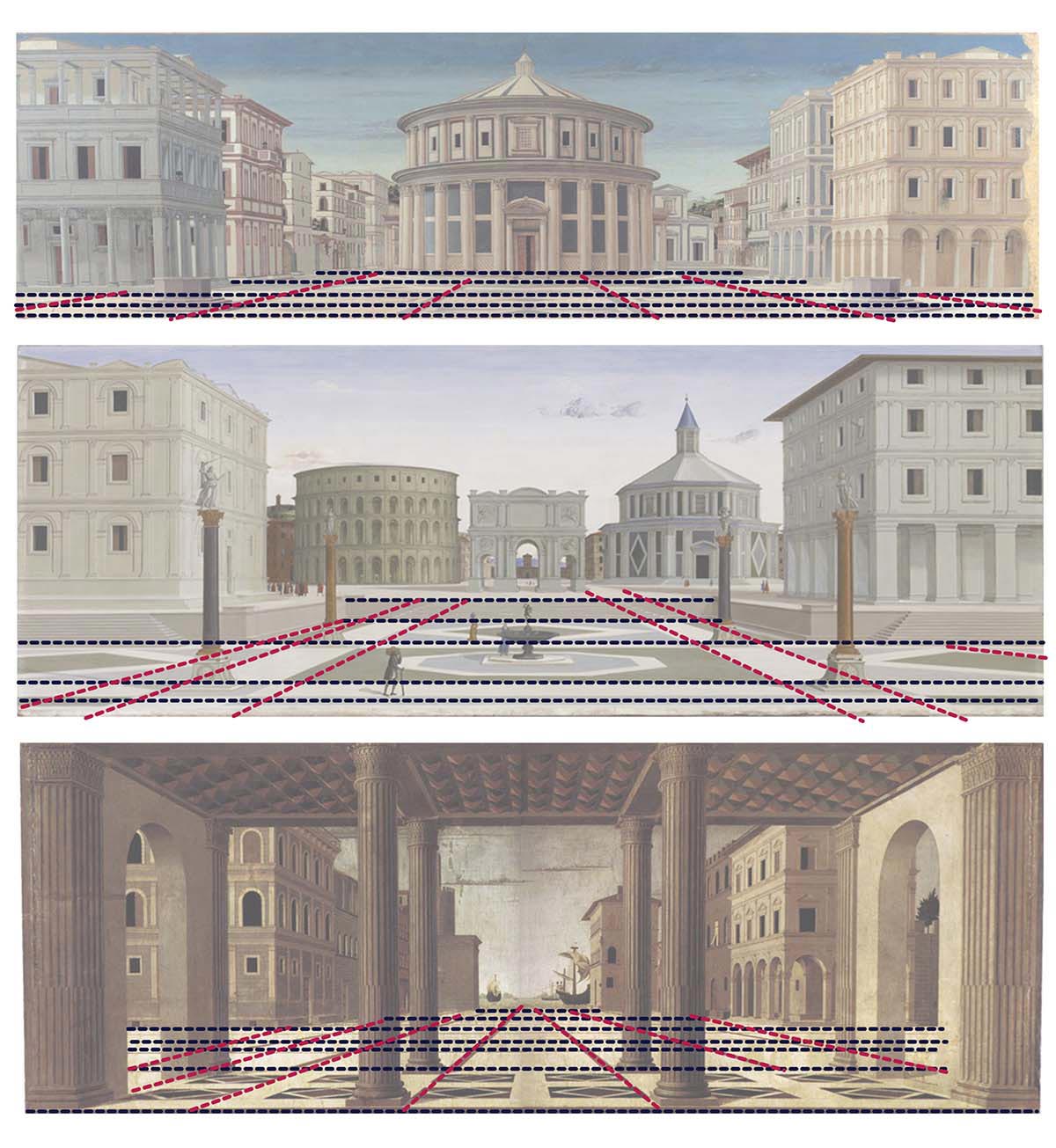 Pictures of ideal cities with the highlighted concept of the chessboard

The concept for ordering the space was taken from the paintings of the ideal cities kept respectively in Urbino, Baltimore and Berlin; a common feature can be identified in them: around the buildings there is a large square whose perspective frame is well defined by the geometric paving.

The model of absolute perfection of the Renaissance city is in fact linked to the concept of “chessboard”: the pavement of the streets, with the intersection of polychrome marble, reflects and amplifies the structure of the city in which the buildings, just like the pieces of a chessboard, are ordered and placed at regular and pre-established intervals of space according to canons of absolute perfection. 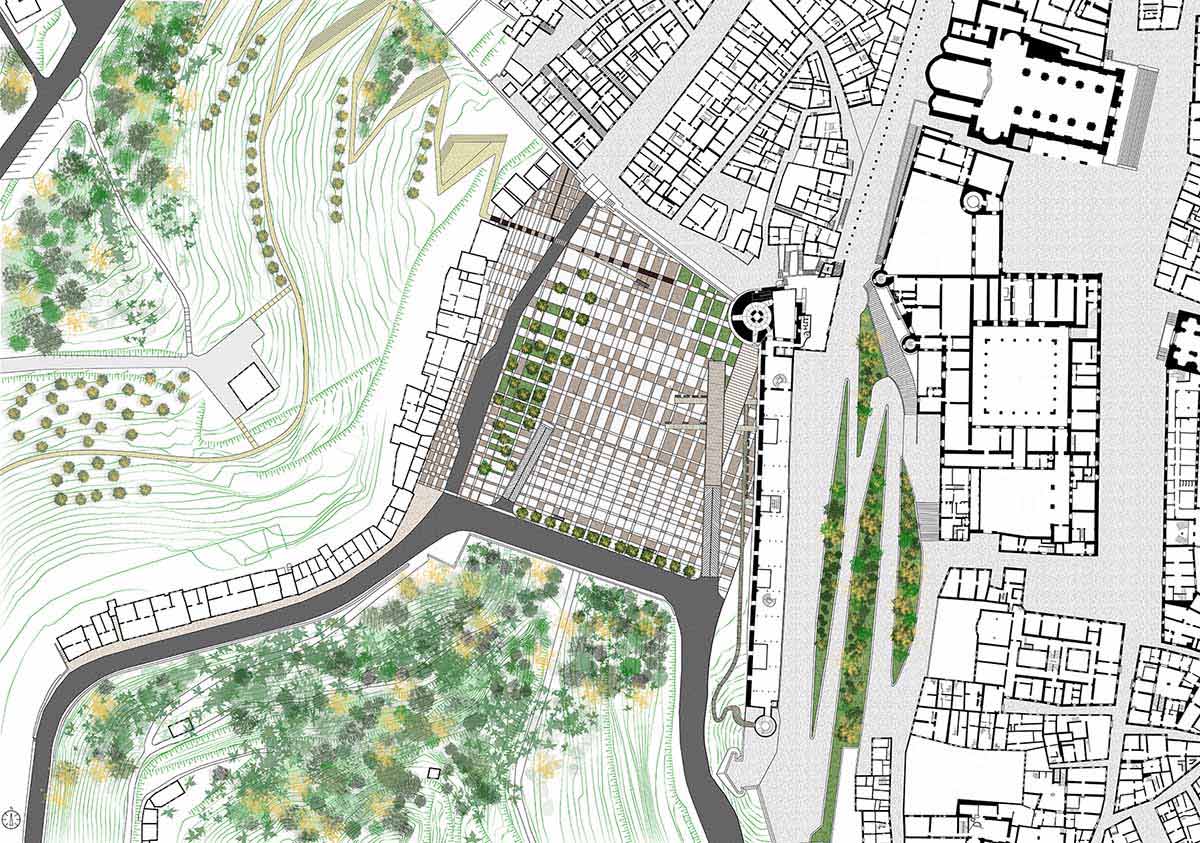 Plan of the square

However, reality shows us how imperfect spaces are often more liveable and captivating than rigorous ones which aspire to be a privileged place in which the historical action of man unfolds. The chessboard, reminiscent of the Renaissance, becomes the design concept that animates the square; however, it is a random chessboard that intertwines its network thanks to some attraction points which are the helical ramp, the access path to the recently built Data, a green area, the entrance to the underground parking and the path that leads to Parco delle Vigne.

The higher density in the attraction points is given by the colors and the materials: the use of darker floors or changes in materials. It is also harmonized by exceptions that overlap a random but perspective pattern: the ramps, the entrances to the car park and the Data, and the driveway that all produce interruptions in the background system.

A large paved surface exposed to the sun could provoke the heat island phenomenon, therefore it is necessary to use materials that prevent it and insert green areas. The choice must fall on floors with high reflectance, made with natural materials, permeable and with solar reflection properties.

Floors of various colors and sizes are available on the market, including slabs, which are suitable for the composition of the random checkerboard of the Mercatale and which are also suitable for paving urban areas, resisting vehicular traffic and not requiring any demanding maintenance.

The green areas inserted in the chessboard are partly tree-lined, and help decrease the accumulation of heat and create shaded areas; it would be advisable to also consider the insertion of an underground rainwater collection system in the area where there is no parking, so as to be able to reuse the water for the care of green areas and for the services of the parking itself with great savings of the resource.

The lighting, made up of LED lamps that emit cold white light, provides safe brightness for road users with less energy consumption. White light passes through fog much better and it also increases the quality of images captured by security cameras. On the square there are lampposts in the central area and path markers in some specific areas, for example in the access area to the helical ramp in which there are seats. 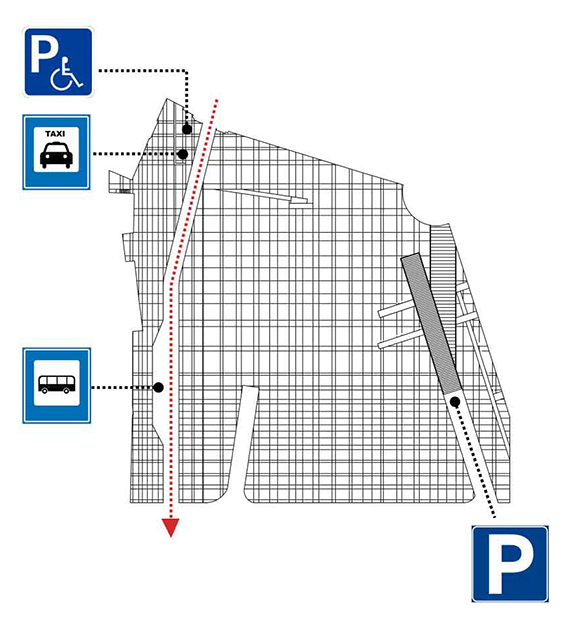 The elimination of stops and the reduction of vehicular traffic at the Mercatale level affects the current dynamics of city mobility. According to the project all the parking stalls currently present will be eliminated with the exception of some parking space for disabled drivers in the area next to the Valbona gate and a stall for taxis, or even just a telephone to call them.

The residents of the Borgo overlooking the square will be able to use the underground parking and the only driveway area will be a one-way lane that continues from Via Giuseppe Mazzini through Porta Valbona and the bus stop coming from the center will be here, situated on a special lane.

Diagram of use of the square

The project was designed to allow the recovery of the area as a public space that can always be used for events that attract a lot of public, such as concerts and fairs, thanks to the possibility of distributing the necessary equipment depending on the event.

It would become an additional space that the city of Urbino could use to offer even more events: for example a contemporary outdoor music initiative, as it now happens in Lucca and Ferrara or as it has happened in the past in Urbino at the Frequenze Disturbate Festival . It is desirable that the weekly market will also be moved to this area, which is more appropriate than the one in which it currently takes place. 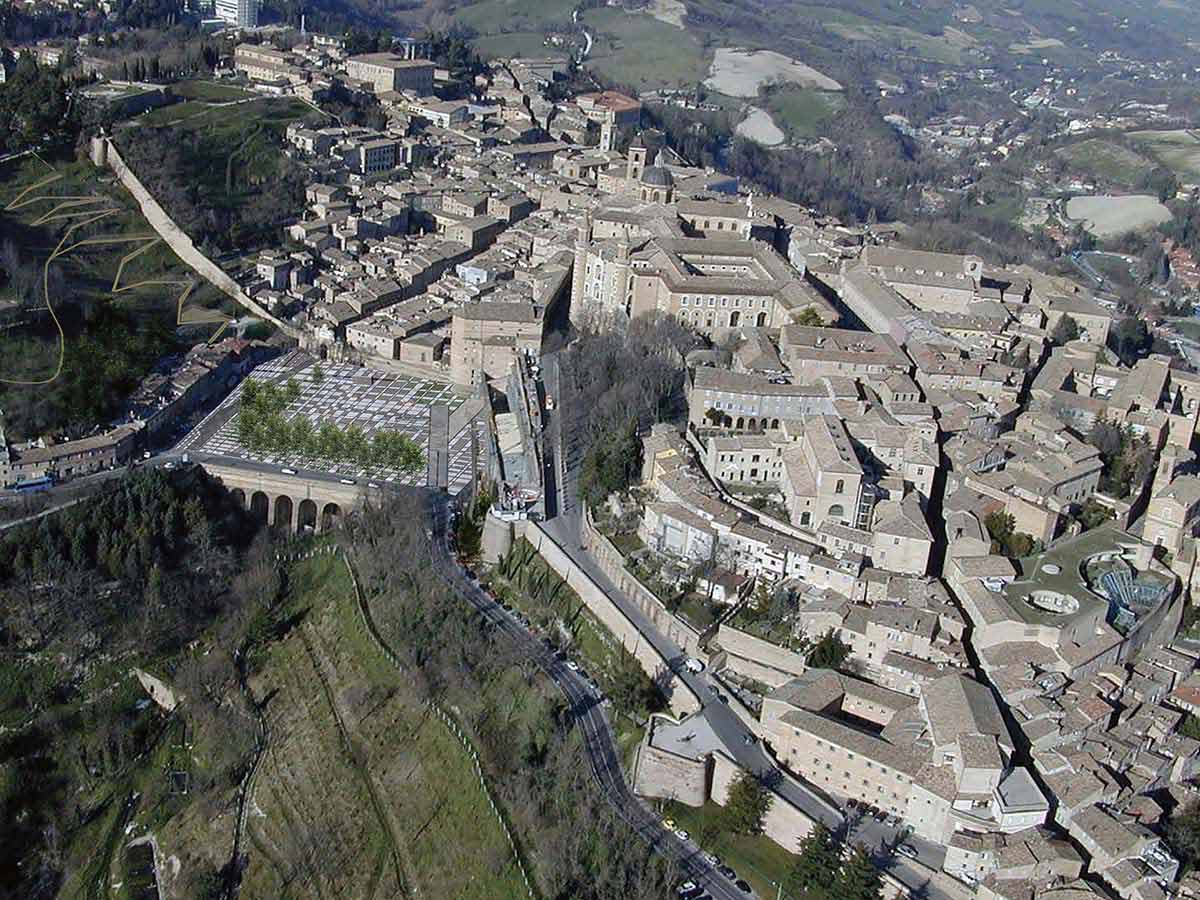 An aerial view shows how the insertion in the context is appropriate to the historical fabric of the city, and how it maintains its color scheme. 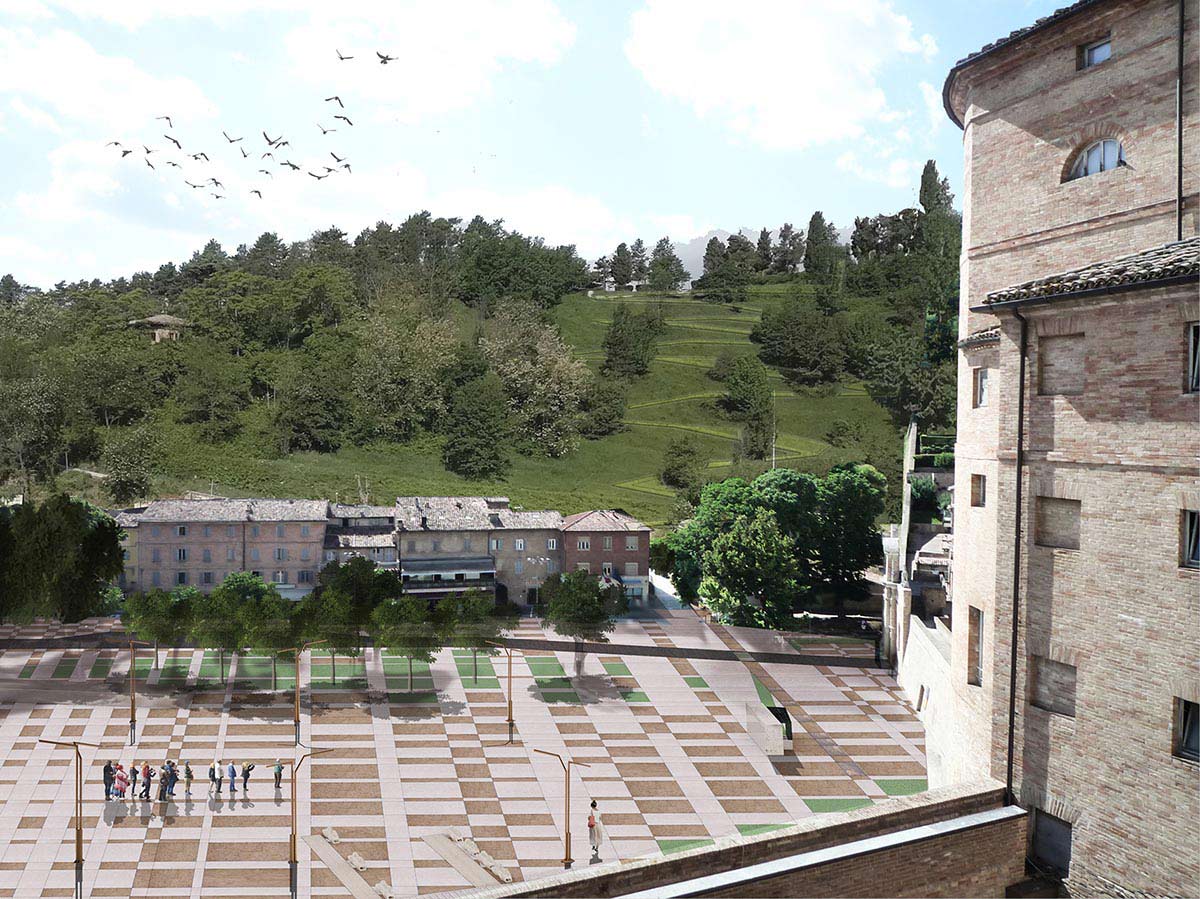 View from the area of the Sanzio Theater

With a view from a height above the square, framed by the area of ​​the Sanzio theater, the path of Parco delle Vigne is recognizable, as a light sign on the hill underlined by the distribution of vegetation, and the chromatic chessboard on which activities would take place to make the area always lively. 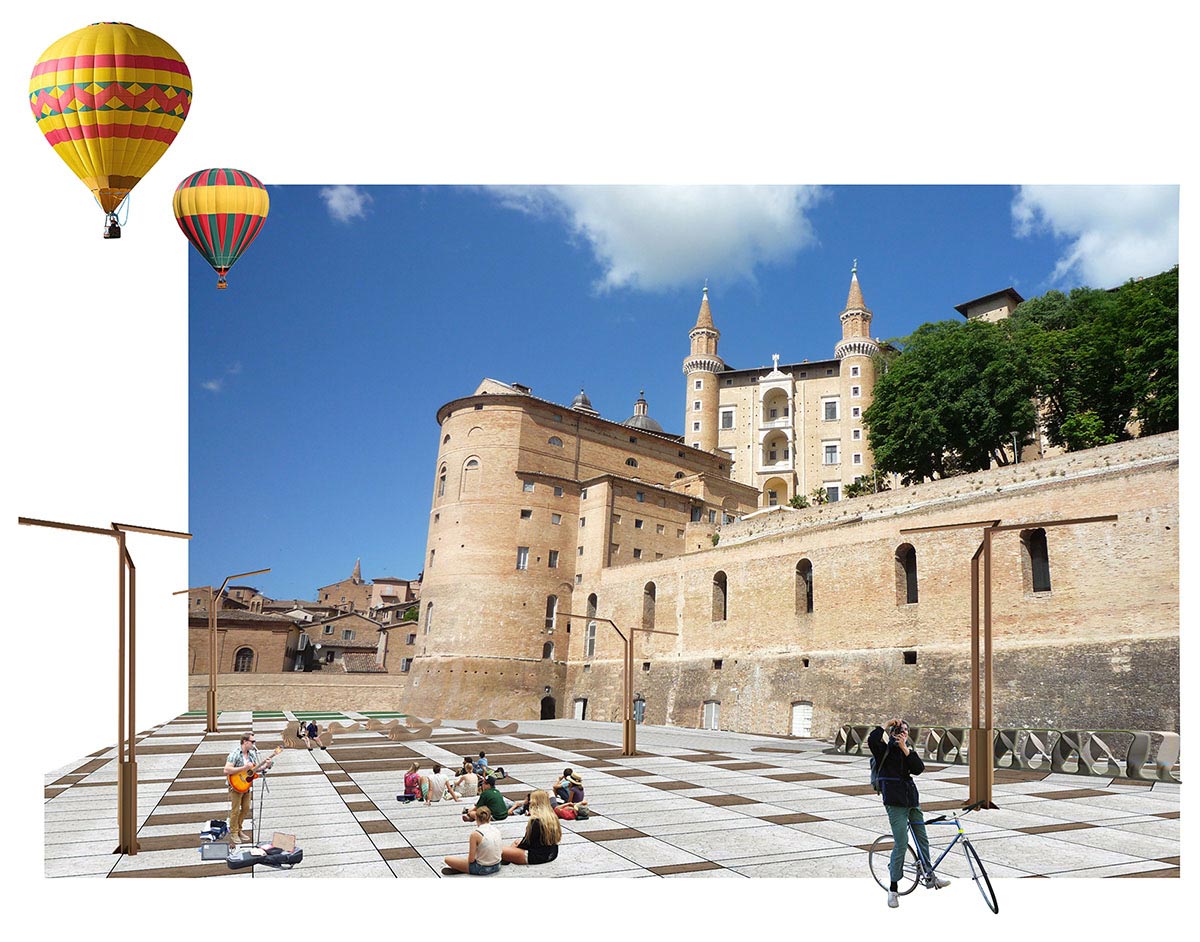 View on the square leve

Finally, with the view at the ground level of the square, it is shown how the volume of the helical ramp stands on the chessboard, with the two small towers behind it like pawns of the game of chess; even if the grid is not symmetrically perfect, it still maintains a perspective on the buildings which, like in the Renaissance representations, are placed in an orderly way with respect to the square thanks to the densification of the chessboard in the points of attraction.