On useless space: from Perec to Matta-Clark 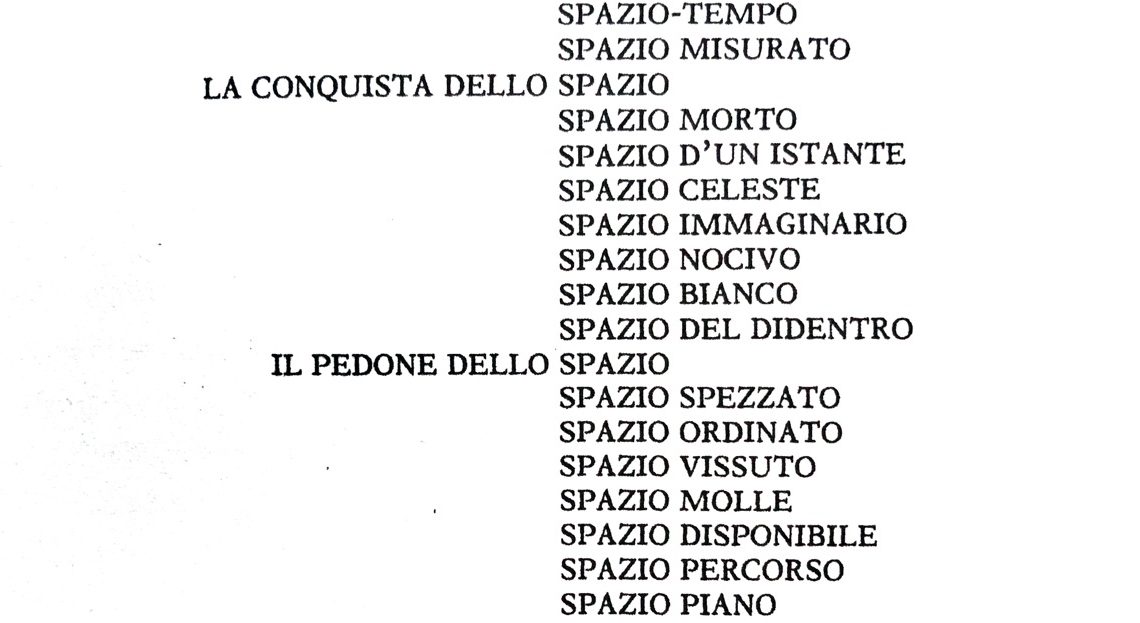 «Space is a doubt» – says Georges Perec – «It is never mine, but it is given to me, I have to conquer it». The individual, so small in the presence of the huge urban complex of the megalopolis, feels the need to ‘inhabit’ hectic and largely anonymous places, impressing ‘mental cognitive itineraries‘ on them. In France in the late 1950s, the ‘Internationale Situationniste’ philosophical movement, born under the leadership of Guy Debord, started ‘urbanism’, a new vision of urban planning understood as an active consideration of the metropolitan reality. The city, no longer conceived as an unchangeable entity over time, shows itself exposed to precariousness and constant change, just like any other living body.

The concept of a living and liquid relationship with the ‘fragments of space’, which characterize the urban network, are the pivotal points in the theory and work of Georges Perec and Gordon Matta-Clark. Both, through an essentially individualistic approach, engaged in active experimentation of a situationist nature.

In the introduction to the book Species of spaces, Perec begins:

The object of this book is not exactly the void, it would rather be what is around or inside it
[…] a bunch of bits of space.

A void “which we call construction” and which according to Attila Kotányi and Raoul Vaneigem:

[…] can be explained with the help of the concept of ‘positive hole’, forged by modern physics. Materializing freedom means first of all removing some particles of a domesticated planet from its surface.

In this void, fruitful of a potential value and strength, the provocative need of Georges Perec to reach an ‘empty box‘ seems to originate:

The “emptiness freed from everyday life” will be a constant thought in the work of the public artist Gordon Matta-Clark. 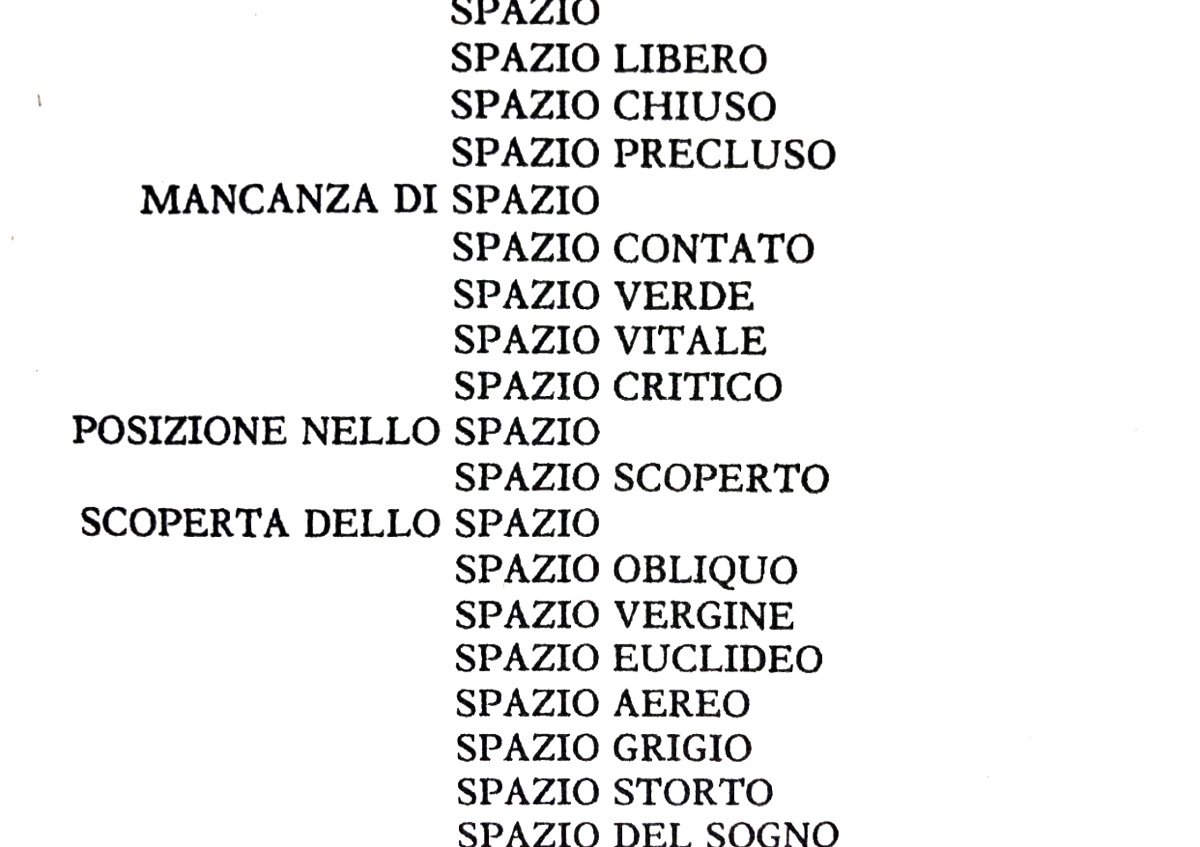 Matta-Clark, the city and the void

Gordon Matta-Clark, born and raised in New York, as an artist, he is par excellence, the son of the metropolitan landscape. From the very beginning, his interest has focused on the environment and the urban landscape. If, in fact, his initial formation was architecture, soon his artistic action consecrated him as a notable exponent of public art. Although we can recognize a great individualistic charge in his work, not to be associated with a specific movement, in Matta-Clark, as previously stated, it is possible to trace a certain closeness to Situationist Unitary Urbanism.

According to situationist thinking:

The architecture of tomorrow will be a tool to change current concepts of time and space. It will be a means of knowledge and, at the same time, of action. The architectural complex will be modifiable. Its appearance will change partly or totally, according to the will of its inhabitants.

Matta-Clark, with his cuts, alterations, with his movements traced and opened in buildings, gave free rein to a diversified way of conceiving the urban network and architecture. His poetics offer ideas and ways to rethink and imagine space. Be it public or private. His cuts open up dilapidated and abandoned buildings, giving the eye new points of view to observe the ordinary from:

[…] A simple cut, or a series of cuts, work as a decisive illustrative mechanism, capable of redefining spatial situations and functional components. What remains visible behind the walls or underground, once exposed, becomes a spatial design, an active element of the internal life of that same building

The artist is also well aware that within the metropolitan urban fabric, finding spaces for escapism that are decidedly physical as well as psychological is an almost impossible task. Even when the city allowas for escape, it is still an entity channeled and shared in the same frenetic and chaotic mechanisms. In this context Matta-Clark looks for a way out and he finds one in 1973, when he encounters empty, unusable spaces, sites that most people would consider decidedly useless.

In the summer of 1973, Gordon Matta-Clark bought fifteen tiny lots of land in New York City, fourteen in Queens and one on Staten Island. These spaces usually served as drainage areas, sidewalks, often no wider than 30 cm. They were mostly unusable areas, auctioned for a price ranging from 20 to 80 dollars:

It was a group of fifteen micro lots of land in Queens, properties that were left out of an architect’s design. One or two were as wide as a strip along the driveway […] the others were spaces for sidewalks and gutters. What I wanted to do was designate spaces that would not be seen and certainly not occupied […]

On the edge of the Wall Street expansion that starts a liberalist turn in economic policies, what directs the artist’s attention to these tiny spaces, sometimes even unreachable on location, is precisely their uselessness and unimportance from an economic and financial point of view. The result is a social action that goes under the name of Reality Properties: Fake Estates.

Taxonomic cataloging by fragments of space

Reality Properties: Fake Estates is conceived by Matta-Clark as a real, meticulous action of taxonomic and professional cataloging of those small lots purchased. In the detailed description of each site, the exact location, the many illustrative photographs in black and white, the ironic vein of his modus operandi are not lost. But in this regard one needs to consider the concept of location, taking a step back into the education of Matta-Clark.

In architecture, ‘location’ indicates a specific physical place, in which an ideational and constructive action must take place and proceed in stages: for the architect, the photographic and informative documentation (the measurements, the orientation of the light, the surrounding context) serves as a preparation phase for the design. For the artist Gordon Matta-Clark and for his action, that same, precise set of technical documents constitutes the chosen landing point.

The artist exhibits his impeccable inventory of useless and unusable ‘species of spaces’ in a museum: only a creative spirit “can give a home” to them.

A personal appropriation of space

The documentary precision employed by Matta-Clark for Reality Properties: Fake Estates, once again recalls the taxonomy employed by Perec as a real, mental technique for appropriating the spaces of the metropolitan area:

Observe the street, perhaps with a little systematic care. Apply oneself, do everything calmly.

Write down the place: the tables of a cafe […]

the time: seven at night

Nothing impresses us. We don’t know how to see.

We must proceed more slowly, almost stupidly. Make an effort to write down even uninteresting things. The most obvious, the most common, the dullest ones.

[…] Forcing oneself to see flatly. Feel the rhythm.

Perec’s psychogeography seems to recall the ‘situationist drift’, that is, an unconditional path that traces an existential itinerary, through the places that form everyday life. Perec offers a taxonomic cataloging “of things without interest”, certainly not without ironic vein, as it is also the case of Matta-Clark’s action, which partly appeals to the ‘thoughtful lightness’ described by Calvino. 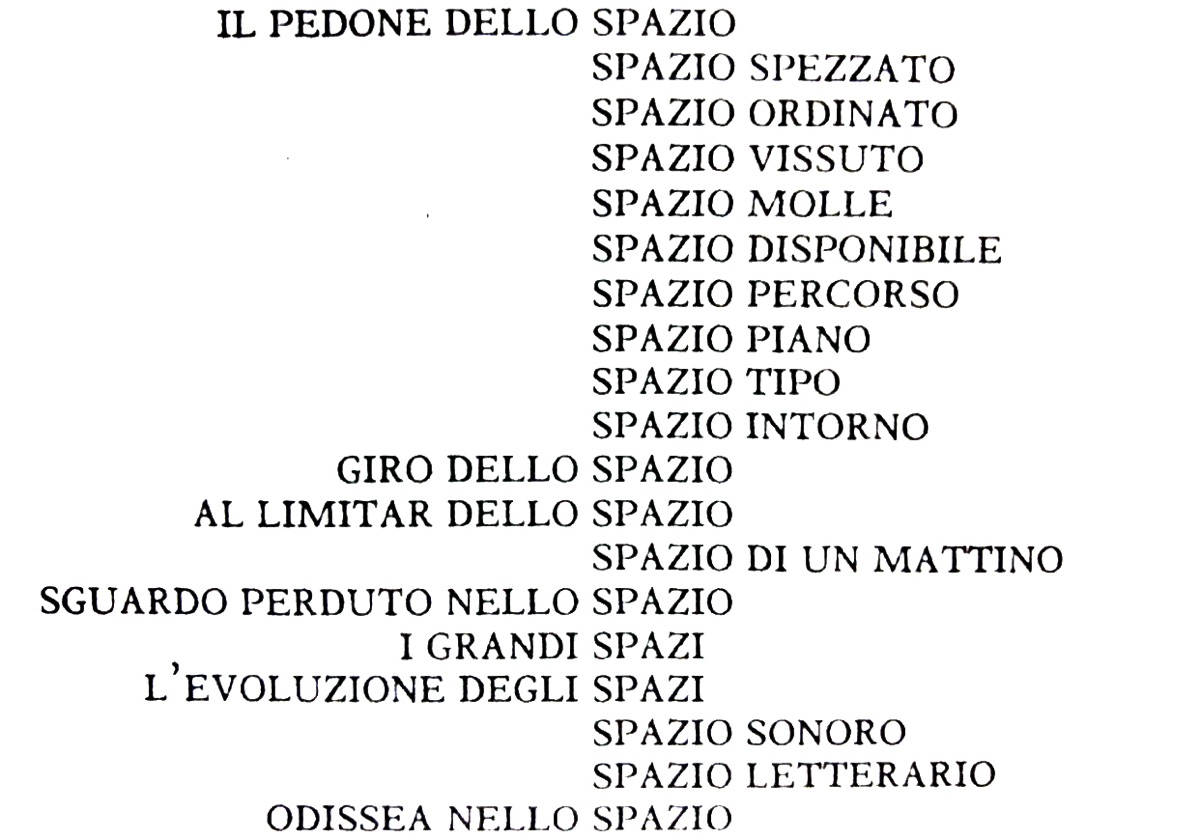 The need for useless space

A space without function. Not ‘without a precise function’, but precisely without a function […]
More than once I have tried to think of an apartment in which there was a useless room, absolutely and deliberately useless. It would not have been a closet, not an extra bedroom, not a corridor, not a closet, not a corner

In Species of spaces, Perec dedicates a paragraph precisely to the reflection on a useless space, reiterating once again that the spaces of reality, at different levels, constitute the identity and profound knowledge of the world we inhabit. Thinking of a useless space means realizing that there is a creative potential that escapes a voraciously changeable and precarious reality…

[…] I have never come to something truly satisfying (about useless space). But I think I haven’t completely wasted my time trying to cross this unlikely line: with this effort, it seems to me that something transpires that could be a rule of habitability […]